Thanksgiving~No Turkey But Lots of Drumsticks 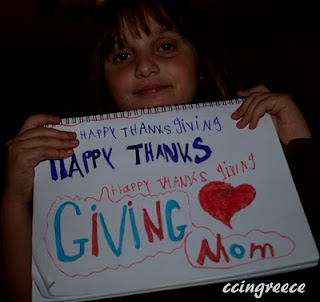 Izabella made me a special sign without any help so she didn't realize Thanksgiving is one word~she's so incredibly sweet. Lucky, lucky me.
~~~
Thanksgiving has come and gone once again and I suppose I can now call this an annual post since many of you are interested in how we've celebrated our holiday and I'm always happy to share.  It's our third Thanksgiving in Greece and I think I've finally figured it out. I don't get stressed about it anymore, not like I did the first year that we were here. I was searching for a turkey off & on for a few weeks, a frozen turkey that is.(for my new readers- Greeks typically only eat turkey around Xmas, therefore it's not widely available or easy to find anytime before December )  I could've probably ordered a fresh one but I can't even begin to imagine how much that might have cost-since I've inquired before. Last year I think my local butcher said that a fresh turkey would cost about 70 euro for 7 kilos- not what I want to spend for a busy weeknight celebration. Now, if I was planning to have guests I'd probably pay whatever I had to, but that wasn't the case. So I searched for a few weeks, but didn't really go out of my way since I knew that a local grocery store always carries turkey drumsticks and I'd be perfectly happy roasting those if there was no frozen turkey to be had, which at the end of the day was the case. Before I purchased the drumsticks I bought a chicken as plan B- but alas, there were enough drumsticks to roast for my family of five. I bought the last six in the butcher's case. 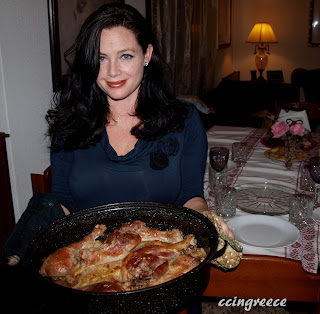 Just out of the oven...
Since I only had drumsticks to roast without a whole turkey to stuff, I placed the drumsticks on top of the stuffing and everything turned out absolutely delicious. And with these six drumsticks I had enough turkey drippings to make gravy that lasted through Friday's leftovers. 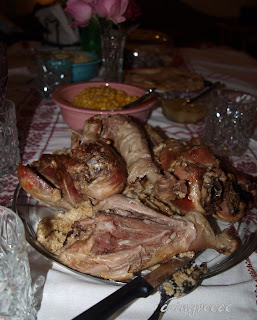 You can see here how the drumsticks were so tender that they fell apart as I removed them from the  pan.
Along with the turkey and stuffing I made mashed potatoes and corn with dinner rolls on the side. I decided to skip salad altogether because we eat salad almost every day and I thought since there was so much food no one would eat it. But I was wrong, my salad eating little man, Foti, asked where the salad was as fixed his plate. Next year there'll be salad. And not having salad wasn't the only hitch, Alexandra wouldn't try any of the food except for the turkey and the rolls- she said, " take that other stuff off my plate." I was shocked by her demand but I suppose it's only natural for these foods to be foreign to her since she was only 10 months old when we moved here and I only make mashed potatoes & stuffing twice a year. OK, I might make mashed potatoes four times a year, but it's not enough for her to become accustomed to the flavors and textures of these foods. She didn't even like the corn, which was hard for me to believe. Most kids like corn, right? Again, it's not something we eat regularly and she's only 4 years old so I guess I can't blame her for being put off by food that she's not used to. Maybe she'll want to try something new on Christmas. 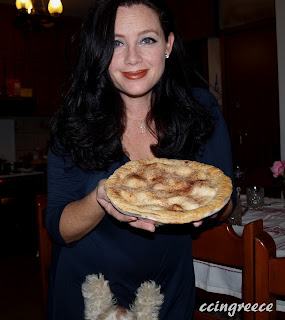 For dessert I made an apple pie which I served with vanilla ice cream. The kids loved the apple pie so that was a winning choice. Izabella is my photographer and we laughed so hard when we saw this first photo of me holding the pie and Gigi begging for some. This is a Gigi photobomb- we have many of these. 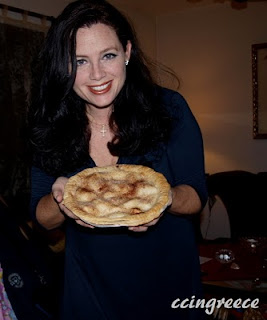 So Izabella insisted in taking another photo, without Gigi's little paws and here is our second attempt. My pie isn't picture perfect, let me remind you that I'm much better at cooking than baking and although my pie looks deflated, it was 100% delicious.
We also enjoyed some cookies and cinnamon rolls that a friend of mine made. She insisted that I swing by to pick these up on my way home from the school. She didn't have to twist my arm. She's extremely thoughtful, I'm thankful for that. 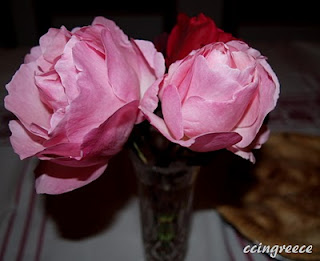 Our weather has been incredibly mild and my rose bushes are flourishing- so I was lucky enough to have beautiful roses from my own garden for our Thanksgiving table. Love my roses! 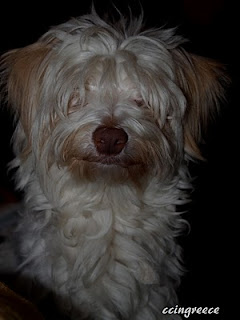 Here's a photo of Gigi looking impatiently at me, waiting for her share of turkey. I know you can't see her eyes here, but trust me... it's the look. 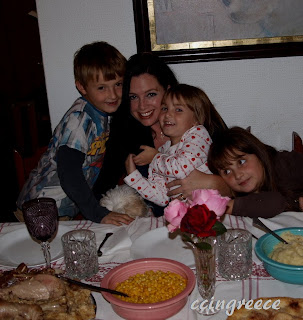 One last photo before dinner...a new favorite of mine.
So as you can see we had a nice, quiet Thanksgiving dinner. I was organized in preparing this year and everything rolled along just as I had planned. We watched the Macy's Day parade via live feed online, made a few phone calls to friends and family, did homework and went to bed on time since the kids had school the next morning.
Thanksgiving is one of my favorite holidays and I miss celebrating with my family and friends in the U.S. because although I have started my own family tradition here in Greece, it doesn't compare to the beautiful  chaos of spending time with my immediate family or being spoiled by my mother's lemon meringue pie. (she normally makes  one just for me! ) I'm hoping that my kids will have fond memories of Thanksgiving and if we're still in Greece when they're older- I hope that they continue this important tradition. Now, on with the rest of the holiday season...ENJOY!
Posted by Cheryl at 1:35 AM