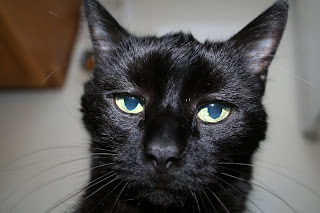 Amalia spent yesterday at the vet. She had all of her shots updated and she now has a microchip. Having a microchip is now required for bringing cats into Greece. The last time that we moved to Greece she only needed have her vaccinations current.

I am really concerned about her this time around. She turned 16 yrs last Friday. She's an old lady! I know that she is one tough kitty (lots of you know too), but as she is a senior now I hope that the trip itself doesn't stress her out too much.

There is also reason to be concerned about her while we are in Greece. The apartment that we will be in for the summer is surrounded by strays. I lost her for 4 hours in that neighborhood once and I was just sick thinking about where she was and what could have happened to her. We walked up and down the streets looking under cars and behind bushes when finally we saw a little black figure moving toward us. It was Amalia. It was the 1st and last time that she actually ran toward me and literally jumped up into my arms. She was dusty but did appear to be unharmed. I was so relieved. She was not allowed on the balcony again after that.

I do want to mention that while I was worried sick and we were searching for our cat our neighbor kept saying, "It's just a cat. Get another one. " I ignored her comment completely and kept searching. That is the general attitude toward animals in Greece. One of my husband's aunts almost fell backwards when she visited us and our Amalia was roaming about freely in the house, she didn't visit long. I think that she thought that she was going to catch a disease or something. The man that came to install our phone line almost kicked her when he saw her, naturally I stopped him before he could. And finally, as we were preparing to move back to America we loaded our baggage into a taxi with Amalia in her carrier when the taxi driver said, "you aren't going to bring that stinky animal into my taxi!"-in Greek of course. Kosta's quick reply was "I am sure that this cat is cleaner than you asshole, do you want to drive us or what?"-again in Greek. The taxi driver apologized an drove us from Drama to Thessaloniki with our cat in his car. A classic moment to say the least.

So we will bring our cat with us once again, but this time she is much more fragile. She will live the rest of her little cat life with us in Greece. We will do our best to keep her safe from other cats, stray dogs and heartless natives that want to harm her, just because she is a cat. She has given us many years of companionship and unconditional love, she deserves to stick with us wherever we are.
Posted by Cheryl at 11:00 PM