Owl in the fireplace 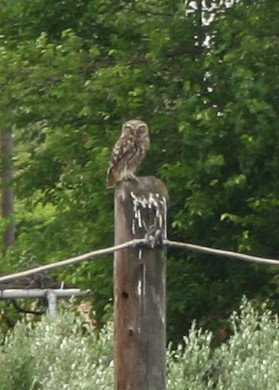 One of our owl friends just after leaving the railing...always watching us!

It seems that during the last few months our owl friends want to get to know us a little better. They've been much more visible will even pose for the camera. It helps because until now, Izabella has been completely terrified of the owls and their "mewing" sounds at night. Their calls can be heard loud and clear since they live in our attic and sit on railings right outside of our bedrooms. Usually, they'll fly away when I open the doors in the morning. Then, I run for the camera but they're usually too far away for me to get a good shot. I really need a telephoto lens! Anyway, as they've grown comfortable with our presence we're starting to learn a lot about them and the kids are starting to understand them rather than fear them.

On Tuesday night the relationship with our feathered friends grew a little closer yet. As we were finishing our late dinner on our balcony the kids left the table one by one. Foti was tired so he went inside. It was almost 9:00pm...that late. I fear that we're already subconsciously submitting to the Greek summer schedule with slow mornings and late nights. Anyway, Foti had gone into the house and the next thing that we hear is, " there's an owl in the fireplace!" Naturally, we all ran into the house and sure enough, there was an owl fluttering around behind the screen in the fireplace. My camera was on the table but I didn't reach for it quick enough since the owl was frightened by us and went back up the chimney. I really didn't believe that it had gone all the way back up or if was even possible but we watched a movie after that and there was no sign of the it so we figured that it was gone. We all went to bed shortly after our movie, except for Kosta, he works into the "wee" hours of the night in his office.

Wednesday morning when we woke up, Kosta told us that he came upstairs at around 4:00am and the light fixture was rocking back and forth. When he looked a little further he noticed an owl sitting on a curtain rod, just intensely looking at Kosta. So, my husband went to the door and opened it. He said that he "explained" to the owl that he needed to go out the door and outside where he belongs. He walked toward the owl and then it flew over his head into the kitchen where the door was open and waiting for his exit. The owl rested on the kitchen cupboards...walked across the tops of them and then swooped down and flew right out the door-just as Kosta had asked him to. He didn't take any pictures because he just didn't think of it. I know, I'm the one with the photo obsession so I can't expect him to think of taking a picture.
The owl left a little mess for me to clean. There were ashes scattered around the fireplace and a few droppings around the living room. Our friend must have been enjoying himself inside for a few hours.

This morning, my husband reported that the owl had been in the fireplace again last night. The proof was in the ashes scattered around the fireplace again . Great, now I have to clean up after 3 kids, a husband, a dog and now...an owl! I know, we should have closed the flue but that would be to easy and a lot less exciting. We'll make sure that it's out of the chimney today and then close it later. So, I'm wondering why the owl wants to come back in. Kosta says it's because there was a plate of food left on the table and it was probably eating the night before and wanted to come in for more. Maybe. Maybe it just wants the thrill of being chased, breaking away from his mundane life in the attic, who knows. I know that I think that it's really neat but also a pain since owl droppings in the house just aren't cool.