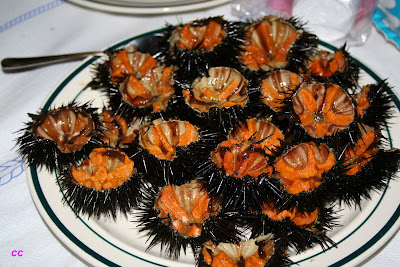 Earlier this week we were lucky enough to be invited to a friend's for a party. Her father was here visiting from New York and was leaving the following morning- so what better reason to whip out the delicacies from the sea? The sea urchins (aheenee) were the being prepared as we arrived. Although I'm adventurous I decided to pass this time because it seems that I've developed allergies to a few different things as I've grown older. For example, I used to love eating mussels in a dish called medea saganaki , but as time went on my body didn't love the dish. It took 2 days to get back to normal after my last serving of medea and that was 12 years ago...oh how I miss it. So, I wasn't willing to have any surprises and I passed on the opportunity to try something new. They did look good and apparently they were, my husband loved them! 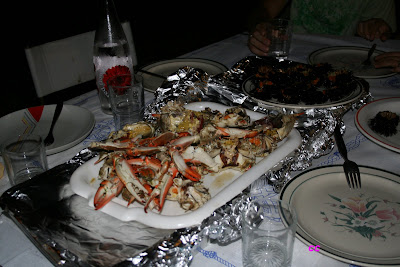 Fresh crab was also served. It looked delicious, however, I didn't get any. By the time I finished wrangling the kids to their table and made sure that they had enough food to eat all of the crab had been eaten. Wah!!! I love crab. That's one thing that I know I can eat. And the bottle with the red Gerbera daisy on it contains tsipouro, I doubt that there are any gatherings in Greece like this without it. And yes, I had some. I love it on ice.

Now, under the crab in the foil wrapped pans is another surprise. I didn't take any pictures but I should have because the three pans contained fabulous foods that I've missed from home. Two of the pans contained lasagna and one contained chicken cordon bleu with mushrooms and a creamy sauce . My friend's father worked in an Italian restaurant for several years and mastered a few recipes. Let me just say that both were absolutely delicious! I've had lasagna twice since he's been here. (lucky me!) Now, I have to get around to making it as I've been sticking to the same dishes lately due to what's growing in the garden and what the kids will actually eat. I'm ashamed to admit that they've almost forgotten that they once loved lasagna.

Also served was fabulous grilled fish, salad and loukaniko (greek sausage). And for dessert we enjoyed the mini ice cream bars that we brought with us. They're called pagotinia (something like this) ...and they're always fabulous. We all ate very well, had a little to drink and enjoyed the company that we were in. In other words, we had a great time!
Posted by Cheryl at 12:39 PM