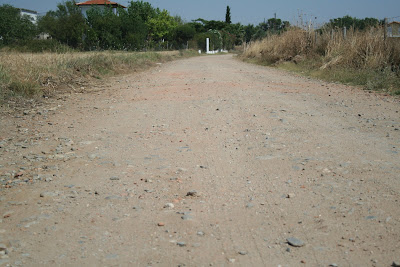 Before moving to Greece, my personal experience with dirt roads was limited. I remember watching television shows or movies that would have scenes of cars speeding along a dirt road leaving behind a huge cloud of dust. Usually, the movies were set in places such as Mexico, Texas, California or even some Native American reservations. I was raised in an urban area and we didn't know anyone that lived on a dirt road. In fact, I think that even most rural roads back home are paved by now. The only dirt roads that I remember in my past were actually long driveways leading to friends homes-that's about it. To add to that, most of them were at least covered with gravel. I usually didn't drive fast on those because I didn't want to show up somewhere like a bat out of hell, it just wouldn't be polite.

So, where am I going with this? I'll tell you. We bought our home in a rural area and all of the roads are dirt and in the winter they're just mud. We're so rural that we don't even have a real address. There isn't a name for our dirt road either. OK, I suppose that we would have an address if our road had a name, but I'm not always the brightest light bulb in the chandelier. Anyway, you get the picture, right?

As the summer closed in and the weather got hotter and everything around us dried up, I noticed that there was a lot more dust on the car and I certainly noted the dust cloud that followed my car. I've noticed neighbors wasting water to wet the dirt road in front of their homes so as to prevent any dust clouds formed by from passing cars from entering their property. It wasn't until one day that was I running late that I truly realized how serious of an infraction I'd committed on a dirt road. I was driving to my koubara's house to pick her up for church one morning. I sped passed an old woman watering her dirt road and left her in a cloud of dust. I noticed her condemning me with her fists through my rear view mirror. I got the drift. I think that my dust cloud threw her over the edge. So, I told my koubara when she got into the car and she just said, "oh God, how irritating...that's how people are around here" So as we pulled away from her house I asked her which direction we needed to go. She pointed in the direction of the peeved woman. Oh God. So I said, " that's where that irate woman is...I'm not going that way!" But we had to. So as we drove closer to the scene of the crime the old woman was still outside...waiting for the next vehicle to drive by so that she could scream, I guess. Well, she noticed my car and my koubara noticed her and said, "ugh, I know her...she does this all summer. " Fantastic. So, as I drove by a little slower this time and the old woman motioned for me to stop. What? Is she out of her mind? She wanted me to stop so that she could scream at me? Are you kidding me? So, what did I do? -I just smiled and waved...and kept going.Once again, I could see her in my rear view mirror waving her hands frantically and clenching her fists high in the air. Is life really that uneventful for this woman? I have to drive by her house whenever I visit my koubara...she knows my car and she sneers at me each time that I pass. I just keep driving and smile as I pass. I have slowed down a bit, but it's hard. How do you go from driving at a normal speed for most of you life to driving at a snail's pace so that you don't leave dust in the air...on a flippn' dirt road? It's nearly impossible, that's what it is. At this point, I almost don't even care anymore. But I do care and I am trying to be mindful of the situation but even if there was pavement there would be dust on the road. This is Greece, it's hot, dry and insanely dusty.

In retrospect, I was involved in a conversation pertaining to one of our neighbors and his penchant for speeding during the summer. Apparently, he had been scolded by others for his lack of consideration as he consistently left everyone in a cloud of dust. At that point, I just didn't get it. It was winter when this conversation took place. I remember that I just said, " well, if it's a dirt road-you should expect dust. " My reply wasn't favorable and I remember the rebuttal was "yes, but if you know that you are bound to stir up more dust if you drive fast, then you shouldn't do it out of respect for your neighbors." I was at a loss at that point and left it at that. I still hadn't had the full dirt road experience so I didn't want to discuss the topic any further.

We've looked into paving the road leading to our house. We've spoken to the municipality and some of our neighbors about paving the roads. The municipality gave us a price for paving our road and the one leading to it. It's really not a lot of money, especially if all of us in the neighborhood contribute to the cost. But, alas, it's not an option for the neighbors. They'd rather complain about the dust and waste money and resources wetting the dirt simply because they don't want the increased traffic that they fear would result from paving the roads. It's much better to dust every day and scream or sneer at people driving by. So, if you're in Greece and you head down a dirt road, it's your choice...you can drive slower than an old man walking or you can let everyone eat your dust.
Posted by Cheryl at 2:35 AM

Email ThisBlogThis!Share to TwitterShare to FacebookShare to Pinterest
Labels: greece