It was a another rainy day when I set out for the grocery store. I was navigating my way around miniature lakes that have formed along the road when I swerved to avoid running him over. I stopped the car and opened the door to see where he went. And then, there he was. Standing in the pouring rain, muddy and shaken was a little black puppy with white markings obviously in need of a loving home and at the very minimum, some food.
I closed the car door and thought to myself..."oh crap". I sat in the car sheltered from the rain as the puppy looked at me from outside. I dug in my purse for my phone and dialed home.
Kosta answered and I said, " you're going to kill me".
His reply was, "what did you do to the car?". (typical male response eh?)
I said, "nothing, the car is fine but there's this puppy out here...it looks distressed and it's alone...near the dog lady...I don't want her to get him. Can I bring him home?" (the dog lady is a dog hoarder, her dogs live in cages and filth...over 200 of them...someone probably dumped him there thinking she's doing a good thing)
Without a pause, he said yes. (Whew... )
I opened the car door and he was a little nervous but then he came toward me, licking my hands and wiggling his little body. I picked him up and put him in the back of the car. He was so muddy and seemed to have some trust in me as he didn't put up a fight when I placed him in the car.
Izabella was home from school that day, she was very ill early in the morning. She watched from the front window as I took the puppy out of the car. She started to giggle and jump on the couch. I put him on the back porch with some food and water. He ate all of the food within minutes. I still had to go to the store so I left him on the porch with some towels and blankets where he was sheltered from the wind and rain. 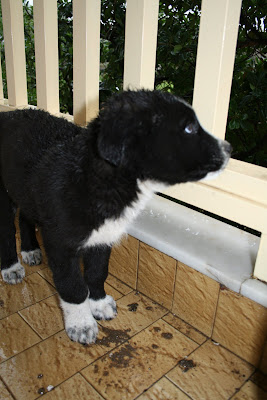 Here he is, shortly after his arrival, muddy and wet. 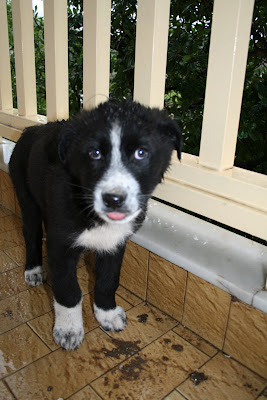 He was a little camera shy too. 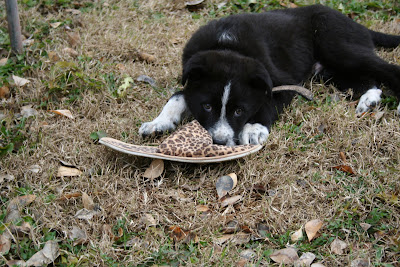 Here he is just days after we took him in... already comfortable with stealing my slippers and outfitted with a masculine collar. 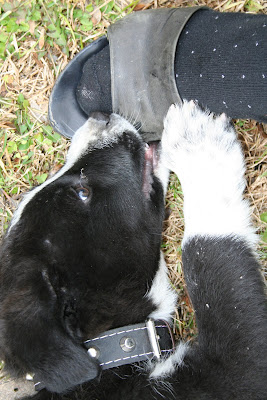 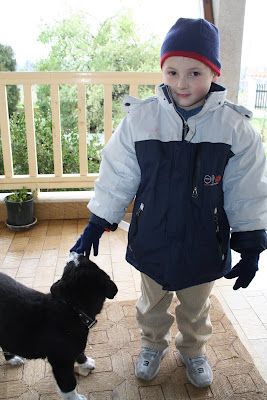 Getting to know Foti.

Foti is thrilled with Tarzan because he's always wanted a big dog...a big dog that's a boy. I remember when we introduced him to Gigi. He was disappointed because she was a small dog. Foti also named him Tarzan. Other name possibilities included: Hercules, Caesar and Zeus. But, Foti picked Tarzan and so that's his name. End of discussion.

We took him to the vet for his immunizations and his estimated age is about 2 months. Yep, he's a big 2 months! He's a Shepard dog but I can't find his breed online. Well, I'm sure that he's not 100% anything, but I'm still looking for the closest match. He's going to grow to be about 70lbs./around 32 kilos and I'm told that he's going to be wonderful with the children. Actually, he is a very gentle dog and is already great with them. We've had him for about 2 weeks and he's already grown a lot. He's also damaged a lot! That's why he'll be our happy outside puppy...much too big for indoors. Tarzan is the now the king of our olive grove.

Shortly after we took in Tarzan, another stray dog came to our home. She walked in the gate as if she belonged here. It seemed as if she knew Tarzan because she went to him as soon as she was in. I put her out of the gate and she came back in through the bars. Kosta and I put her out again, only for her to return. We spent 2 hours on a Sunday afternoon putting plastic mesh over the bars so that she couldn't get in...but alas, she got in. As she would squeeze through the bars she'd get stuck and squeal as she wiggled her way in, she was desperate. We couldn't watch her do it anymore...so we let her stay. I called a local animal rescue agency and our vet to try to find her a home. She's adorable and really no trouble at all. We've actually considered keeping her too. But can I have 3 dogs and 3 kids?! I received a call from an organization in Thessaloniki, they may have found a new home for her. We're really on the fence because she's a doll. And, whenever we open the gate to pull the car out -she watches patiently and as soon as we're ready to close the gate, she runs back in, making it clear that she plans on staying. So, we haven't officially named her because we don't want to get too attached. Izabella calls her "Asproula" and I call her "Blondie". 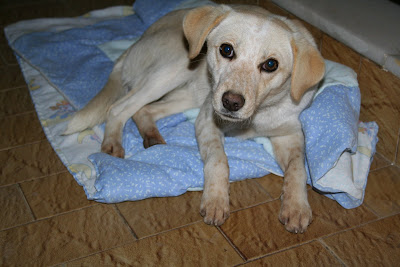 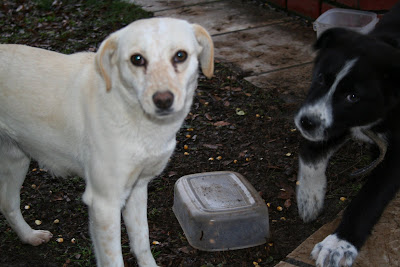 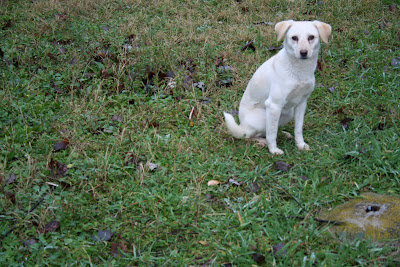 I'm not sure what will happen with her but whether she stays here or goes to a new home, she'll be loved more than she apparently had been. I've got my hands full but it's ok. The kids love having 3 dogs to play with also. There's never a dull moment around here.