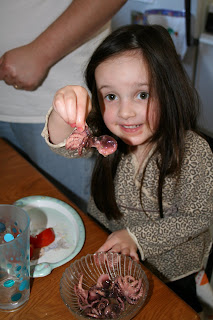 Iza and the worst-tasting octopus
salad EVER!


Boxes, boxes and more boxes!Kosta brought A LOT of boxes home last week and we spent the better part of this weekend filling them. Izabella packed up almost all of her stuffed animals not fully understanding just how long that she would be without them. We already opened one box so that she could reclaim one of her animals and will probably unpack all of them within the week. Foti, however, won't let anyone touch anything of his.

Preparing to sell the house and packing things to move overseas has definitely got to be one of the biggest projects in my life. I have to be honest, I am not looking forward to it. I recorded an Oprah episode a few weeks ago that I think was very informative and helpful. The show featured families decluttering their lives. Ok, I don't have nearly half of the stuff that these people had, but the insight was extremely helpful. For example, I had things in boxes that I hadn't seen in years, so why did I keep it? Can't tell you...so I tossed them. Really, if you don't use something within a year or two, you don't need it. Seeing Peter Walsh help people sort through clutter was great. I have been inspired! The tricky part is throwing away toys without the kids noticing. My mission is to rid ourselves of every McDonald's toy that we have acquired. I am still trying to convince Iza that we should give toys that she hasn't used in a while to a shelter or another charitable organization. Wish me luck!

We did get to go for a walk with the kids over the weekend. It was absolutely great on Sunday and even better today. Today it was 58F! Oh, and we had a little spring "kick off " lunch on Saturday. While we were at Whole Foods Saturday morning we stopped at their awesome fish counter. Kosta bought a flounder and I picked out an octopus salad because I have been craving octopus! Anyway, Kosta grilled the flounder and it was delicious! The octopus, however, was the worst that I have ever tasted. We consider cooking fish outside on the grill an early spring ritual because I won't cook fish in the house...especially in the winter. I have tried every precaution to combat the fish smell in the past and nothing has ever worked so I would rather just skip cooking fish in the house all together.

So far I don't have too much planned for this week. I am going to try to contact the owner of the Montessori school in Greece, again. It has been a complete miss on my end. I need to get up a little earlier to make sure that I catch her. We have decided that we do really want to buy the house that we have been looking at so we are just waiting for the financing to go through before we make our offer. This is so big!
Posted by Cheryl at 5:56 AM