Looking for a Poppy

After weeding my 16 rose bushes and planting a few flowers & seeds yesterday I felt a little stressed and I was crabby. I think that's because I usually view gardening as refreshing and therapeutic. Yesterday, however, it wasn't. Alexandra kept attempting daredevil-like stunts and would go missing from time to time. I had to keep getting up to find her. Gigi kept trying to dig in the freshly worked soil around the flowers that I planted. She also kept pouncing on Alexandra when they were playing but knocked her over a few times only to make her cry. It's amazing to watch a toddler and a puppy fight. Foti wanted to watch a movie inside, then he wanted juice...and pudding...he needed assistance in the bathroom...he wanted to go in the basement to see his dad...he wanted to play outside...he wanted to go back inside. His shoes were off & on at least 5 times within an hour. Izabella was whining because she couldn't figure out what she wanted to do, it was the same with her- in & out. Finally, I tried to redirect their attention and it worked. I had Iza help me with planting and watering. I gave Foti the job of watering the planted seeds. Finally, I gave Alexandra a spoon from the kitchen and a pot of dirt. She was thrilled. Everyone was busy and I finished my work.
As I was cleaning up Izabella asked me if I had seen the one poppy that was growing in the back by the garden. I said "yes, but I thought that it had lost its petals already". She insisted that there was another one so we went to look for it. Iza also mentioned that she could tell that I needed to take a little walk around to relax-and that I needed to bring my camera to take a picture of the poppy. Aren't kids perceptive? So here are somethings that we noticed on the way to find the lone poppy... 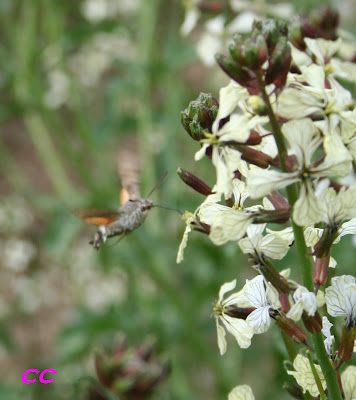 A Hummingbird Hawk-moth... It took me about 10 tries to get this shot. We have a lot of arugula that's flowering and it's always full of bees, butterflies and these little cuties. 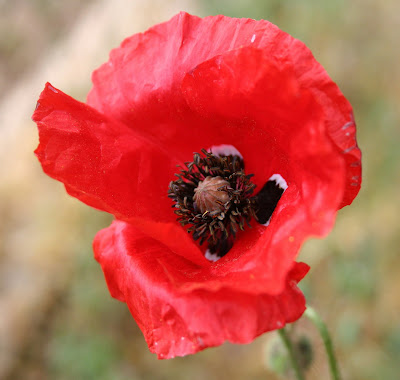 The one poppy that we were looking for. It might be the only one in bloom for now, but there are a lot more on the way. 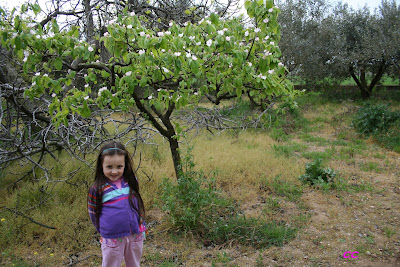 Our quince(kithonia) trees have blossomed. I hadn't noticed until I walked through the yard with her. (please excuse the huge, dead branches behind Iza-still cleaning up & gathering wood from the major pruning event) 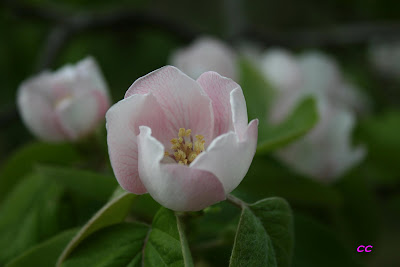 The blossoms from the quince trees are just beautiful! 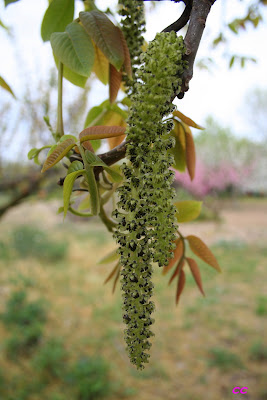 The walnut tree is blossoming. 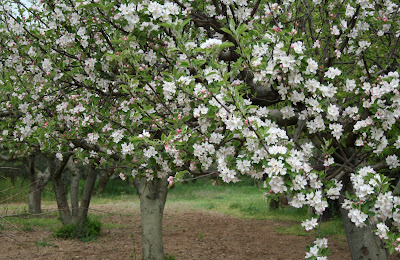 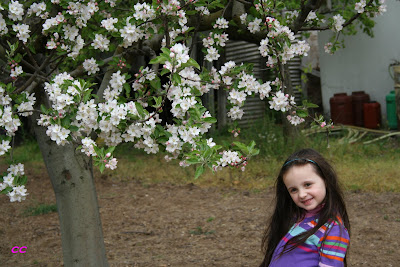 The apple trees are in full bloom.

We also found a green catepillar that Iza put in her bug jar in hopes that it'll turn into a butterfly. To be honest, I can't tell if it's a catepillar or just a worm but we'll see.

Iza was thrilled to take this little walk with me and I was more than happy that she suggested that we look for that one little poppy. She helped me out of my funk and I'm so grateful. She redirected my focus...just as I had redirected hers earlier. I was refreshed and ready to make dinner, which she said was the best that she'd ever had! (talk about boosting mommy's ego!)