Before I move on to May 1st I'll share some dog days of our little Gigi. Just before Easter, we discovered ticks on her. We were pulling them off as we found them. I guess her FRONTLINE had worn off. So, between the time that we applied her next dose of tick/flea repellent and the time that it actually started to work we were battling 20-30 ticks a day...seriously. We tried to keep her in, but when she would go outside to do her business she was just inundated by them. I'd never seen a tick in my life before this. So I spent about an hour the Wednesday before Easter pulling ticks off with tweezers and Kosta spent another hour the next day doing the same. He'd never seen a tick in his life before this either. We saved our Gigi and now although she's been treated we still have to check her several times a day. She was tick-free and clean as can be for the Easter weekend as I gave her a bath at about 11:30pm the Friday night before we left for Kozani.(she also got a break from them spending time in the city!) I felt so bad for her because we couldn't really hug her until we were positive that she was clean. I can't believe how fast ticks find my dog! Oh, and we found two on Alexandra that, luckily, we were able to remove before they bit her. Crazy. We find them on our stairs daily and burn them...the kids are on tick alert! We're learning a lot about living out of the city, it's hard work. 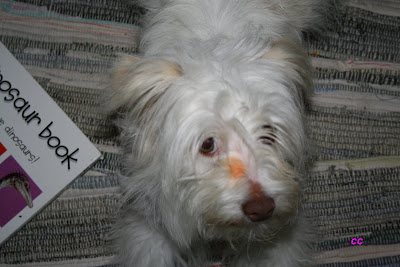 The photo above was taken the day after Easter. She was tagged by Alexandra's orange marker. Poor puppy! 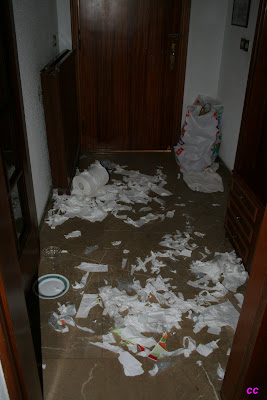 And finally, this photo is what happens when you leave your dog home in the confines of a hallway with a new, unopened roll of paper towel. We were shopping for May 1st and wanted to keep her inside...away from the ticks...and she got bored and had a party. Looks like she had fun doing it.
Posted by Cheryl at 9:00 AM