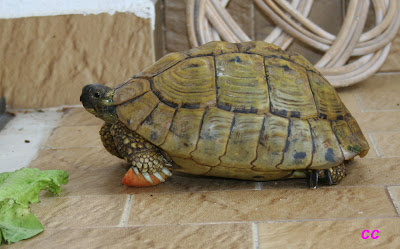 Here it is..."Tortalitza"...that's the name of our newest resident. If you would have told me two years ago- that my oldest daughter would become the princess of all things reptile in Greece; I would've never imagined it. Tortalitza arrived last Sunday. Iza is thrilled and actually obsessed with her new friend. Although the chosen name sounds feminine, the gender of our little friend has yet to be confirmed.

Foti was interested in the tortoise shortly after it's arrival but could care less about it now. Alexandra loves it. She points at it and screams, "toi toi"! (how cute is that?) I didn't really mind its presence at first but then I read up on how to care for it. First things first...everyone and I mean everyone... told me to feed it grapes and apples. Wrong! I read that fruit should only be given to the tortoise as a rare treat as it may cause the thing to have diarrhea. Not on my balcony! So, I snatched the apples and grapes that had already been provided. I'm going to pat myself on the back here because I knew better and put some romaine lettuce out for it, not fruit. I have some tortoise knowledge tucked away up in that mushy brain of mine. As I looked for information about it I discovered that it's a Spur-Thighed or Greek tortoise. It was difficult researching it though, because most of the information regarding care is directed toward people that purchase these tortoises at pet stores. This tortoise was picked up from of my mother-in-law's, aunt's farm. Hence, it was wild. It was moved from one outside location to another and I have no intention of having this little reptile join us in the house in an enclosed environment. We have it confined in our garden for now and there's plenty of greens for it to eat.

Gigi doesn't like Tortalitza at all. She barks and barks...and barks at it. Although I've locked her out of the garden, she's managed to wiggle her way through a hole in the gate. I heard her barking for about 10 minutes the other day so I went outside to see what was going on. She was digging a hole in front of it and barking incessantly. So, I picked up the tortoise so that Gigi would follow me. I tricked her out of the garden. It was difficult handling the tortoise because its hind legs would jet out and scratch my hands. As soon as I passed the gate I took a step back, put the tortoise down and slammed the gate shut. So, I went back into the house and within 5 minutes Gigi was at it again. I built a barricade in front of the gate. It's now blocked by a huge wooden case and a small barrel. Going into the garden won't be easy anymore. I'll have to make a new enclosure before the spinach and romaine start to grow.


So, now we have a tortoise.


On a positive note-receiving this tortoise helped me persuade Iza to donate the Balkan Green Lizard to her classroom. She's donated a toad, a lizard and a walking stick kind of bug. She really wanted to keep the lizard. So let's see -lizard or tortoise? I'll take the tortoise!


One more thing...and I'm not joking....she found a snake in our empty pool this afternoon (only in my life -right?) I took pictures but I haven't uploaded them yet. I had to convince her that this creature could actually be dangerous but she kept insisting that she wanted it. Now she understands that it could possibly harm her so she's stopped begging for me to catch it. The snake is still in the pool. I have to muster up the courage to help it out.


I'm submitting the photo of Tortalitza to the Camera Critters meme. I guess that there's never a shortage of critters around here. :)