Owl in the bathroom!

Oh yes, we had an owl in the bathroom. This incident happened about three weeks ago. It began with about one week of squatting in the fireplace. The little owl would come down to have a look around and Gigi would bark so it would then scramble back up the chimney. This noisy and messy routine was constant. It was messy because each time that the owl would make its way down the chimney or flap its wings, soot would come down and get all over the floor. Messy. 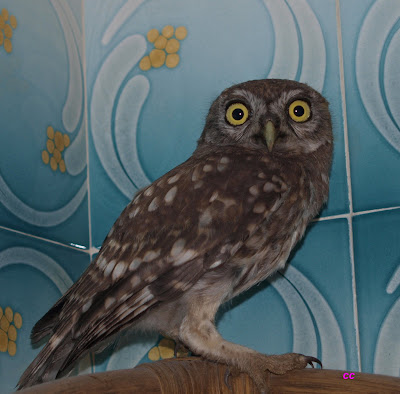 I think that the owl's eyes compliment our 30 year old bathroom tile.
What happened?
This little owl finally decided to escape from the confines of the chimney very early one morning. I think it was around 6:00am.
Gigi had been acting strange. She would jump off of the bed, run down the hallway, bark and come back to bark at me some more. I was so incredibly tired that all I could do was roll over and cover my head with the pillow. She jumped on the bed, she jumped off of the bed. Any normal person that was coherent might have probably realized that Gigi was trying to tell me something, but not me. I was irritated. She's been known to bark at spiders so I assumed that's what was happening. I opened the door and put her on the balcony, hoping that she would stop the incessant barking.
She didn't stop.
I rolled over, looked up at the ceiling and then it hit me...Gigi was trying to tell me something. I got up and opened the balcony door so that she could come back inside. She ran down hall and stood at the threshold of the bathroom door, barking.
I heard something drop on the floor in the bathroom. Next, I heard the sound of wings fluttering. I knew it. I knew that the owl was in there. Great. How am I supposed to catch it and get it out of the house without waking everyone up?
I grabbed a broom. With confidence, I went into the bathroom with the broomstick aimed toward the owl. Well, it did perch on the broomstick right away but not for long. It flew from the broomstick to the dryer, to the top of a shelf and then into the bathtub. I started to freak out a little.
Izabella woke up because of all of the noise that Gigi and I were making. She added to the noise by screeching whenever the owl flew from one side of the bathroom to the other. Gigi was barking, I was trying to keep the situation under control.
When the owl decided to sit on the side of the bathtub again, I grabbed a towel and picked it up. I didn't want to squish it so I wasn't holding it too tightly and then it dropped out of the towel onto the floor.
Gigi caught it and ran away with it in her mouth. Feathers were flying everywhere.
I yelled, "Gigi...put that down!" (yeah, like she's going to listen when she's got a real live toy to play with) The owl squirmed from the grip of her little jaws and flew back on top of our dryer.
I was at a loss.
Throughout these chaotic moments my husband remained in a deep sleep. I don't know how, but he did. I decided to wake him up so that he could help out.
"Wake up," I said as I nudged his shoulder. "The owl is in the upstairs bathroom."
Husband, "What? It is?"
"Yes! You haven't heard Iza and I screaming, running...or Gigi barking?! Oh, never mind. I need help."
So, he went upstairs and looked in the bathroom. Within minutes he had the owl wrapped snugly in the towel. We had a good look at it. It had a good look at us. Next, he took it to the balcony and let it go. The little owl quickly flew out of our sight. I don't blame it really, with all of the noise and commotion that we made. 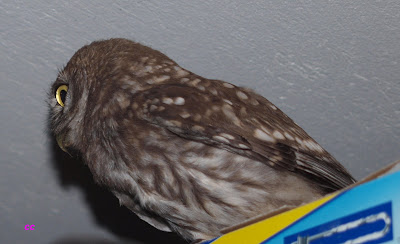 On top of the dryer...
Why do owls keep coming in our house?
We're not really sure, but there's definitely a pattern. We do know that they nest in our attic and that this only happens during the summer. The previous owner of our home claims that it the owls sit on the chimney, get dizzy and fall down. I've noticed that they come in whenever it's really hot outside. Whatever the reason, they are known to make their presence in late June through July. We do have plans of putting a metal screen around the top of the chimney and haven't done it yet because it's too high to reach. We'll have the house painted soon and when there's scaffolding available, we'll have the screens put on. Although it's always interesting to have an encounter with an owl, I'd prefer not to have catch it. 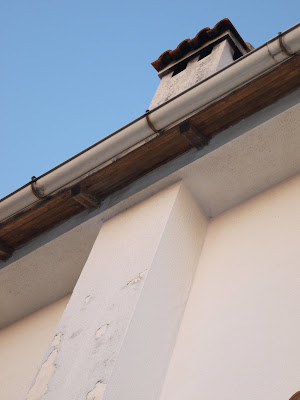 We need more than a ladder to get to the top of the chimney!
Photos from our first visits last summer... 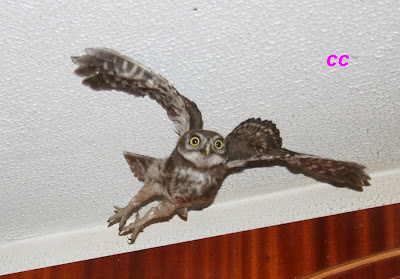 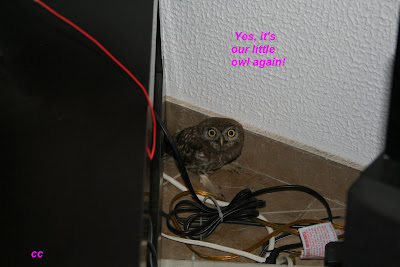