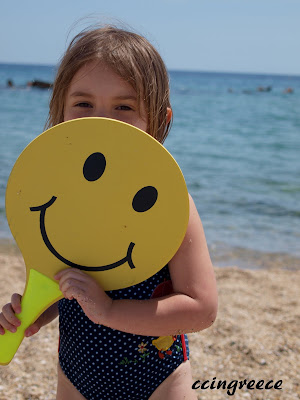 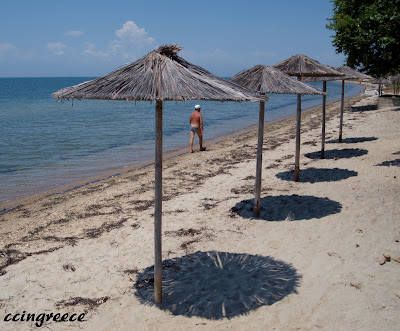 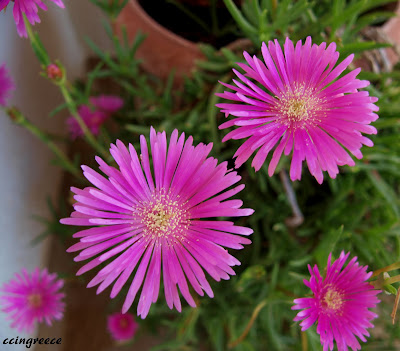 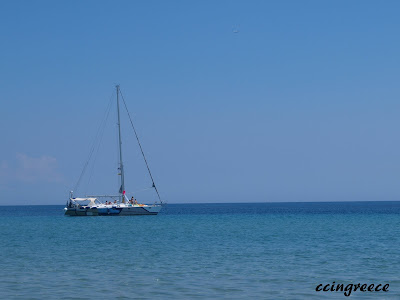 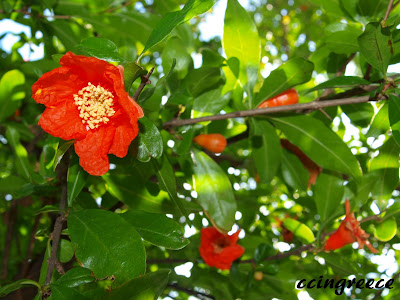 Pomegranate blossoms
Summer is a promissory note signed in June, its long days spent and gone before you know it, and due to be repaid next January.
~Hal Borland~
Posted by Cheryl at 2:06 AM 12 comments: 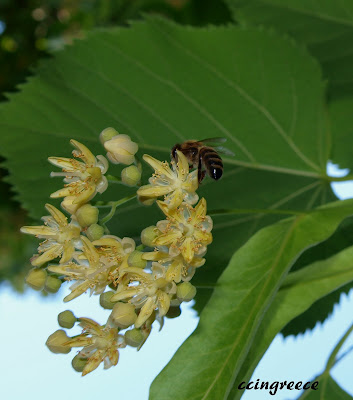 Flamouri Flowers
The flamouri (φλαμούρι) trees have blossomed and are passed their peak. For nearly two weeks we've enjoyed the sweet and  light floral fragrance breezing through the air. The scent of our trees was enjoyed throughout the property as well as inside our home, given that we've had our windows open for nearly a month now. I anticipate the blooming of these trees and this year they were just a little late due to cooler temperatures and a string of  rainy days.
One day last week I was talking to myself, which is fairly normal. I mentioned that I didn't know when I would have time to harvest any given the horrible weather and our social commitments. Funny enough, Izabella was actually listening. When she came home from school the next day she went to outside to play with Foti and  a while later they came in and asked for two large bowls. I asked them what their intent was...how what they needed them for and they told me that I've been so busy that they would help me pick flamouri. I melted...just melted. Does this mean my children are finally old enough to really help me outside? And on their own? I see things getting a bit easier around the garden.
So, they set out to pick the flowers. When I went out to show them how they should be picked I was pleasantly surprised that Izabella remembered from last year. See? They're getting so self sufficient! 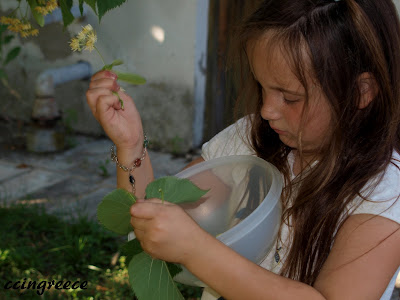 Izabella removes the larger leaves not used for making tea. 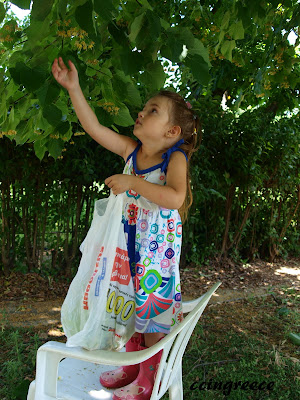 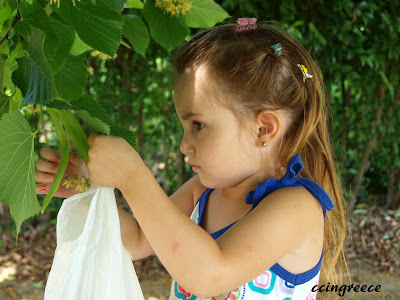 Alexandra concentrates on her task. 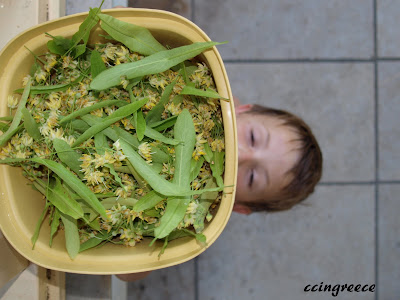 Foti presenting me with  his bowl of flowers & leaves. I was on the balcony lifted it up for me to see. Nice work!
~
Flamouri tea is also known as Tilio ( Τίλιο )
in Greek and Linden in English.  Flamouri tea has many health benefits and has been used as an herbal remedy for centuries.
Some of the common uses for flamouri tea include treating a cold or a cough and other related symptoms.  I find it helpful because it helps clear up my nasal passages whenever I have a stuffy nose and provides relief when I have a sore throat. The tea has a calming effect and it is often suggested that one should drink a cup to relieve any stress & anxiety that's affecting the body.
The fragrance is so light and floral, it's also used in making soaps or used in skin care. Last weekend I gifted some of the tea to friends that were visiting from the U.S. and they were impressed by the fragrance that permeated the plastic bag I had packed it in. I'm sure the inside of their luggage probably smelled pleasant once they were home.
I've been suffering from a sore throat for a few days and I boiled some of my already dried flamouri. It's always so comforting. If you haven't tried it, I highly recommend  that you do and hopefully you'll enjoy it as much as I do. 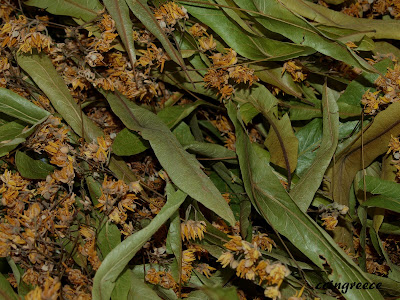 A Trip to the Market

One of my favorite things about living in Greece is that open markets are a part of everyday life, unlike my other neighborhood in Milwaukee, where we have to wait for summer and warmer weather before an open or "green" market becomes available on a regular basis. Although, I have to admit that I shop at the open market aka "laiki" more often in  the spring and summer months since it always seems to rain on the day of our local laiki during the winter.
The kids also love the experience of the market, especially since they always leave with wonderful treats. The photos I've posted are from recent visits.
~ 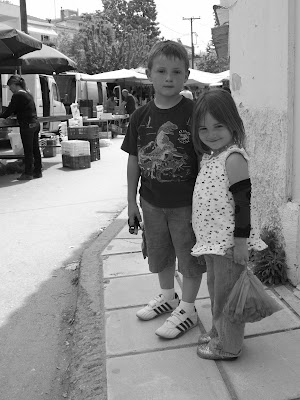 Foti & Alexandra posing at the market.
Alexandra has a small bag of assorted candy in her grasp, she chose her favorites, of course. 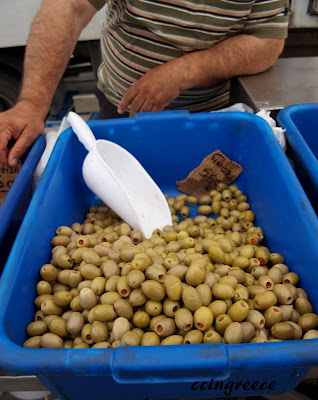 My favorite olives, stuffed with red peppers. I use these when I make arroz con gandules. Although, I have to say it's arroz SIN gandules since I have run out of them a few months ago. Now I use red beans/frijoles rojos instead. 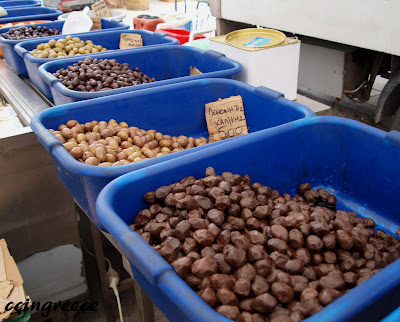 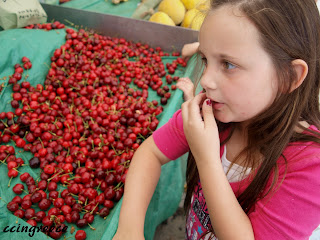 It's also cherry season. I absolutely have to go to the market for these every week until they're gone. My girls love to taste a few before we buy any. 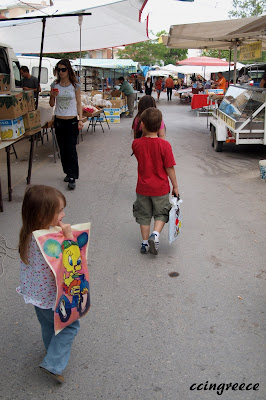 Leaving the market with treats in hand.
Notice how the kids are paying close attention to their surroundings. They enjoy going to the market not only to absorb the sights and smells; but also because now that we are regulars, many of the vendors take special care of them and often treat them with candy and smiles. That alone takes the monotony out of shopping for fruits and veggies.
~
Posted by Cheryl at 1:11 AM 19 comments:

So maybe a little more than fifteen minutes... Kosta's TV appearance About.com:Greek Food A Love Affair with Winter Greens Christmas in Greece
‎“love life, engage in it, give it all you've got. love it with a passion, because life truly does give back, many times over, what you put into it” ~Maya Angelou