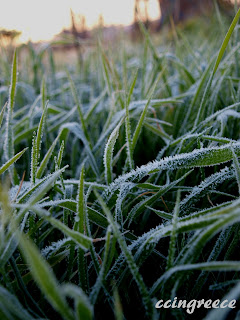 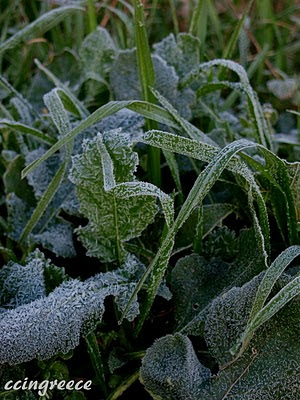 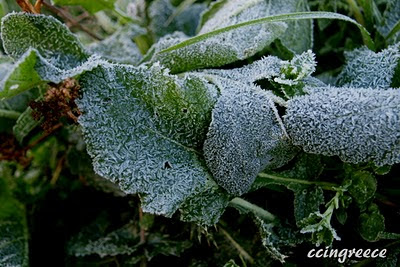 Winter has been mild this year but most mornings everything is covered in frost. Sometimes everything is so white that the kids try to convince me that it had snowed during the night. I say the same thing with every frost, "Looks like Jack Frost has been busy"...and then I explain the difference between snow and frost and they're  still thrilled. One by one they make trails in the frosty grass- the same way that they would in snow.
I knelt down on my knees to take these photos while Foti stood patiently watching. The kids are very patient with me and my camera. The most wonderful part of my obsession with photography is that they're learning by watching. From uploading to editing and then posting on my blog- one (or all of them) is always near. When I started this post Foti was anxious for his turn on the computer. After he saw me upload the photos of the frosty leaves and blades of grass he asked if they were from the morning that he stood by my side. When I told him that they were, he wanted to look closer, enlarging them so that he could inspect the frozen images of the frost.  As soon as I finished showing him the photos, I talked about Jack Frost and read a few poems to him.
Here's one classic that he enjoyed listening to me read.
***
Jack Frost Poem
~ Hannah F. Gould~

The Frost looked forth one still, clear night,
And whispered, “Now I shall be out of sight;
So, through the valley, and over the height,
In silence I’ll take my way.
I will not go on like that blustering train,
The wind and the snow, the hail and the rain,
That make such a bustle and noise in vain,
But I’ll be as busy as they!”

So he flew to the mountain, and powdered its crest;
He lit on the trees, and their boughs he drest
With diamonds and pearls; and over the breast
Of the quivering lake he spread
A coat of mail, that it need not fear
The downward point of many a spear
That he hung on its margin, far and near,
Where a rock could rear its head.

He went to the windows of those who slept,
And over each pane, like a fairy, crept;
Wherever he breathed, wherever he stepped,
By the light of the morn were seen
Most beautiful things; there were flowers and trees;
There were bevies of birds and swarms of bees;
There were cities with temples and towers; and these
All pictured in silvery sheen!

But he did one thing that was hardly fair–
He peeped in the cupboard, and finding there
That all had forgotten for him to prepare–
“Now, just to set them a-thinking,

I’ll bite this basket of fruit,” said he,
“This costly pitcher I’ll burst in three;
And the glass of water they’ve left for me
Shall ‘tchick’ to tell them I’m drinking!”
***