It's been over a week since my last post! I usually don't like to have that much time lapse between postings but I've been very busy. Kosta was in Wisconsin for the whole month of October and there's a lot of work to catch up on. Also, the first week that he was back I was very sick so he had to step in and help. I have perfect timing, don't I?
That weekend he left to visit his family and later in the week he had to travel to Athens to finally have the emissions tested on our car that we imported over a year ago. So, he was gone for another three days so I've been on my own a lot.
Of the more important things that needed to be done last week were having our diesel delivered so that we could finally have real heat in the house and we had to have the property tilled(freza) since it rained most of the month of September and it didn't get done then. So, here are some photos from last week... 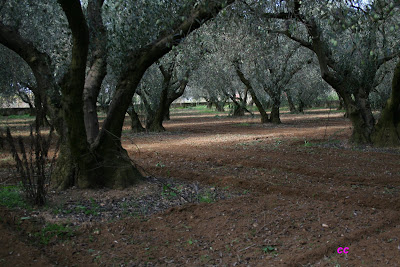 Freshly tilled soil-I always love how the earth looks just after this is done. 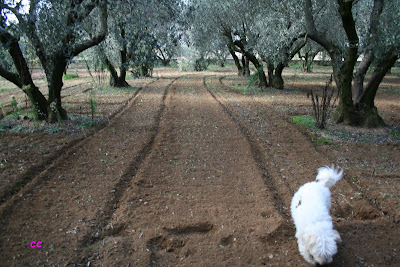 Gigi really enjoys the fluffy soil after it's been tilled. She rolls in it! (drives me over the edge!) But, it makes her happy. Dirty dog! :) 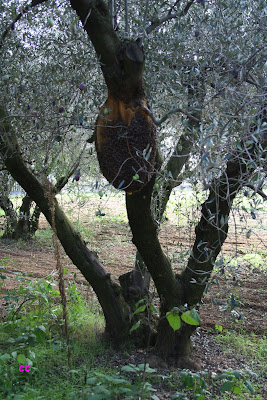 The man that was tilling our soil made an amazing discovery in the olive trees...a beehive! The bees must work very fast because I was just back in the trees picking olives about one month ago and this wasn't there. It's impressive isn't it? The best part is that now we have our own honey! 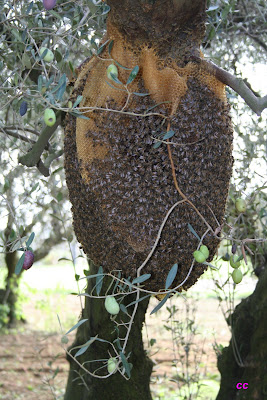 Here's a closer look at the beehive. I didn't want to get too close as I'm sure that most of you understand!

Our neighbor has the experience and equipment to handle bees so he said that he would help us remove this hive. We're probably going to set up our own boxes(is that what they're called?) so that we don't destroy the colony. Bees are disappearing rapidly and we'd like to do our little part in keeping them around. This beehive is just amazing and it's a great experience for the kids to see them at work, priceless experience. 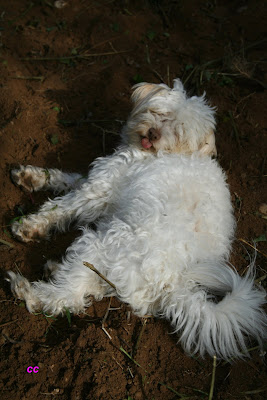 Here's a photo of Gigi basking in the dirt, like a little piggy. 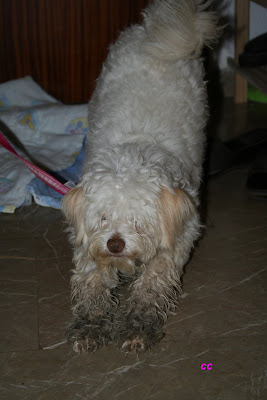 It rained a few days later and Gigi decided to really act like a little piggy and she almost turned black. She had more burs on her than normal on this day also. So, we've decided that Gigi isn't allowed outside without a leash this winter. I can't bathe her everyday. I don't like it and she definitely doesn't like it so we'll see how this works out.

I'll leave you with a photo of a beautiful sunrise that I captured. Have a great week! 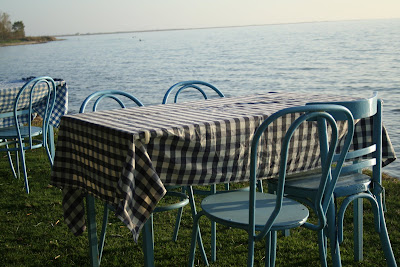 Today's weather was gloomy and cool. I took this picture last Sunday when the weather was sunny and warm...
Posted by Cheryl at 1:38 AM 13 comments: