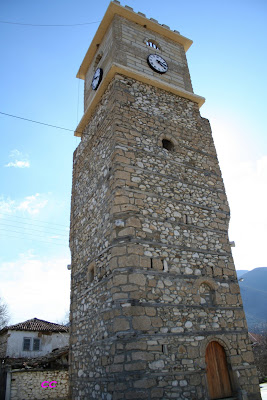 Agistro Clock Tower
Our anniversary weekend away was just what we needed. On Friday night we left our house at about 7:30 pm and headed for the village of Agistro near the Greek/Bulgarian border. The village of Agistro is home to thermal springs that have been used since the Byzantine era. We thought that it would be really nice to visit the spa there and try to relieve ourselves by soaking away some of the stress that we've accumulated within the last year. Our first "bath" was scheduled for 10:00 pm.
This trip was definitely necessary since it helped remind me just how nice things can be in Greece, since I've been overwhelmed with bad experiences since we've moved here. I know, I haven't even blogged about everything- but in time it will all come out. Anyway, as we were getting closer to our destination we called the hotel to let them know that we would be a little late and that we probably wouldn't make the 10pm bath. Not a problem, the woman on the phone assured us that we would get in for another bath. Once we were in the village we had to call the hotel again for more specific directions. The village is so small that we were only a block away so we weren't really lost. Once we found the hotel we noticed a petite Greek woman standing in the parking lot. It was Maria, the woman on the phone, the owner of the hotel. She was waiting outside for us, to make sure that we would find the hotel. (it really wasn't hard...) After a very warm welcome we walked inside together. The hotel was small and very new. Apparently, it opened about a year ago. (bonus-in a small village-this is a bonus!) As we were checking in Maria informed us that our bath was scheduled for 10:30pm and it was for an hour. This was another bonus since apparently it's hard to get anything more than a half hour on weekends. She walked us up to our room and we basically dumped our things on the bed and got ready to leave for the spa. There is a hotel at the spa but it was booked and at the end of the day, it was much nicer to not be at that hotel since it was so busy.
We drove to the spa and arrived on time since it was just a few minutes drive from our hotel. As we walked into the lobby of the hotel I couldn't believe how many people were there, it was completely packed. We checked in and sat at a table to wait. At 10:45pm a young man called out our name and asked us to follow him to the bath house. I had no idea what to expect, I didn't know that they had 5 different bath houses. I thought that there was only one, the original bath house that's been there for hundreds of years. As it would have been cool to use the original bath house it wasn't available but the one that we had was amazing. So, we followed the man outside down a short path to our bath house-it was #2. Only after he opened the door did I realize that it was private so that was way cool. We got undressed and opened the door to the bath and steam rolled out the door. The room was lit only by a blue light. The water was gushing from 2 separate spouts out of the wall into the bath. It was absolutely a dream. We got into the bath and the water was so warm I was relaxed almost instantly. I could feel the minerals in the warm water soothing my aches away. So, we had an hour to sit and soak and it was really just what the doctor ordered. I tried taking photos, but the steam wasn't great for the camera, it just wouldn't work. Here's a link with photos of the spa. I also have to say that it was quite a romantic setting and I haven't felt that way about anything in years.
The next morning we got up for breakfast and had a great conversation with Maria's husband, Apostolis. We asked for his advice because we were preparing to drive into Bulgaria. He advised us to take a taxi instead of driving our own car since apparently there is a lot of car theft and/or vandalism that occurs over the border. Plus, we still have our U.S. plates on our car and that would have been a hassle to deal with going in and out of the country. He summoned a local taxi driver for us. So, we took a short taxi ride into Bulgaria. We stopped at a supermarket that was locked before and after we entered-which to me, means that it's not a very safe place to visit. What I mean is that as you walk up to the supermarket someone unlocks the door and after you are in the store they lock the door behind you...and lock again after you leave. That says a lot about how unsafe the area is. But, the women that worked there were really very friendly and spoke both Greek and English. 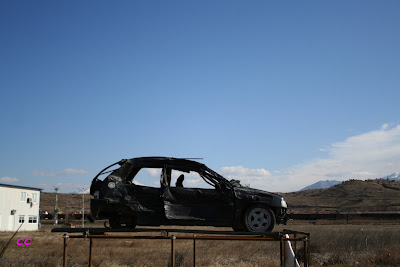 Here's a photo of a car that was on a platform just near the supermarket. When we asked why this car was displayed this way we were told that it's to serve as a warning for speeders...basically this is what will happen if you drive like a maniac-

After our little visit to Bulgaria we went back to Agistro and walked to the nearest taverna for lunch. It wasn't very far and I think that we picked one of the two tavernas that we saw in the tiny village. The taverna was interesting in that it served as a gas station as well. But it was fresh and new and we had a cozy table right near the fireplace. The food was out of this world! We loved the melitzanosalata! It was served toasty warm with lots of garlic, just amazing. Have a look- 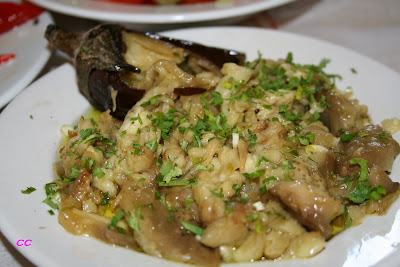 It was during lunch on Saturday that I was struck with a warm feeling. It was a feeling that reminded me of why I agreed to uproot my entire family and home and bring them to Greece. For those of you that are in Greece or have been here you may know the feeling that I'm referring to without me even having to type anything more. It's a sense of belonging, a sense of what life is really about. To me, there's nothing more enjoyable than sharing fresh food with people that you love at your own pace. I've never been to a taverna or restaurant in Greece where the wait staff seems to rush you, in order to flip a table for the next round of customers, never. We sat and enjoyed our lunch, loved our food and sipped our wine when I said to Kosta, " This is what it's all about". We sat and enjoyed our conversation and slowly gathered ourselves together only to take a leisurely walk around the village. There was virtually no traffic or no hideous noises. I noted that I hadn't heard a siren since I left the U.S.-where I would hear them around the clock.

Here are some photos that I took on our walk- 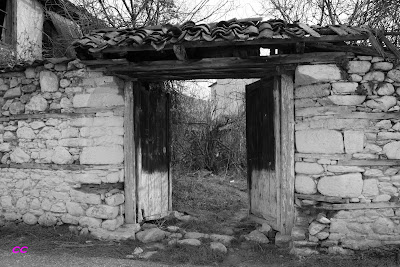 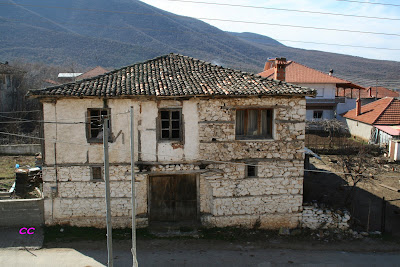 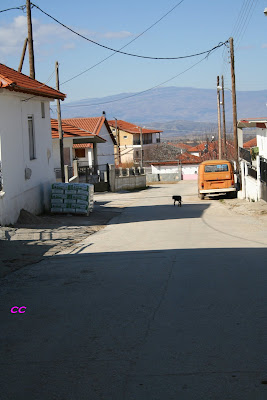 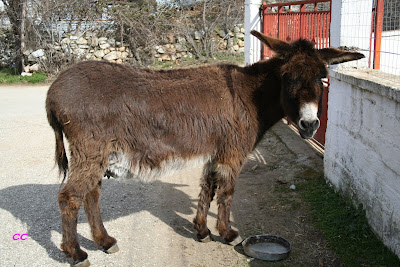 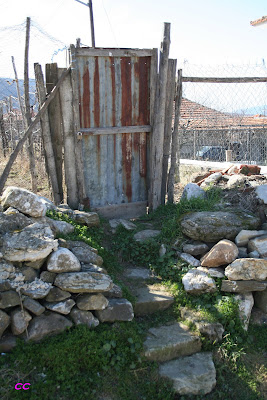 Once we returned to the hotel we took a long afternoon nap. Again, just what the doctor ordered. When we woke up, we had afternoon coffee and took a ride around the area. We explored the area and returned to the spa promptly at 8:00pm because we had a massage appointment at 8:15pm followed by another dip in the fabulous thermal springs. It was absolute heaven. After our last soak we cleaned up and headed out for another fabulous meal. This time, we went to the other taverna in the village. It was really busy and we decided that although the food was good, the food at the taverna where we had lunch was much better. Another brisk walk(it was really cold that night!) back to the hotel and we turned in early.

Sunday morning we went down to the lobby for breakfast and enjoyed a conversation with yet another family member that ran the quaint hotel. It was the son, Kosta, this time. We talked politics and of course about America. We watched the news about all of the snow that they were getting in Athens and we all chuckled as we didn't even see a flake in the air and we were on the northern border of the country. When we asked what time we needed to check out he replied, " Whenever you want"...followed by a spiel about how he hates to rush people out of his hotel, how when he took his wife to Athens that he felt stressed because he needed to rush through his breakfast and check out of the hotel and also that he tried talking to the manager and it did him no good because there were more people waiting check in. It's small hotels like his that are necessary in the world, I think. They had a computer at the front desk, but I noticed that it was off all weekend. They still used an old desk calendar and physically wrote in each appointment as needed. It's that kind of hospitality that helped us thoroughly enjoy and celebrate our 18th wedding anniversary, it was all just perfect for us.

So, we took our time and packed our things to start off on our trip home. Our kids were waiting anxiously for our return and although we had a great time, we needed to get back to our lovely chaos. Oh, and Izabella sent "Tigery" & "Kitten" with us, we had to get them home too! 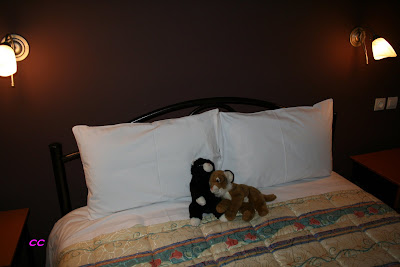 Tigery & Kitten at the hotel 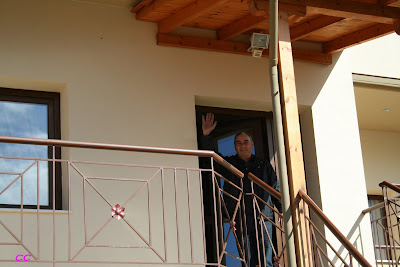 Apostolis waving "good-bye" as we left