It was midsummer  when she told me that she would be travelling to Thessaloniki and since it's near my home, we agreed that we would meet. It was a must, since we'd been blog friends for about a year. I was anxious to meet her as I find her an inspiration. She's an amazing writer and I find myself consumed by her posts. I prefer to read them in the morning as I sip my coffee since they're usually entertaining, informative and as I've already said, inspiring.
I've tried her recipes and many of them have become favorites and staples on my table. I join her in solidarity as a mother of young children and an expat that's trying to teach our good eating habits by offering healthy choices and homemade meals on a daily basis. I've learned so much about the natural foods available at my footsteps, foods l probably would have never considered eating as I thought they were only weeds that I needed to get rid of. She's someone I can send an email that consists of a mere sentence or less...and she knows exactly what I'm talking about. She's funny, intelligent, thoughtful and adorable. She's Maria Verivaki, the Mediterranean Kiwi of Organically Cooked. 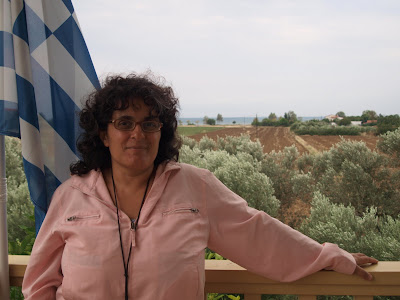 Maria on my balcony.


Early in September, Maria and her family embarked on a vacation that was quite different for them. They  took a ferry boat from Crete to mainland Greece so that they would have the opportunity to explore the hidden treasures of Greece at their own pace. We expected her to be in our area the during first weekend of September. The two of us explored different places to meet and we had originally settled on meeting at the mall in our area. On the day that we had planned our visit, she and her family were set out for Halkidiki. So, I thought about it a little more and then I thought about the children. Sure, we could meet someplace neutral it would be nice, but what about he kids? If we were to meet at the mall my kids would start wandering off or begging for something 10 minutes after we had arrived, it's inevitable. Then, I thought about her kids. They have been in a car off and on for a few days and were probably tired. So, I decided to invite them to our home for coffee as it's on the way back to the city, where they were staying. After I made my suggestion, she agreed that it would be a nice change.
I met Maria and her family in the center of my town since it's usually much easier for us to have first-time visitors follow us to our home, given we don't have an address. Naturally, I recognized her immediately. She was standing beside her car so I parked behind hers, hopped out and gave her a great big hug. Next, I was introduced to her husband Dimitri and then her children. The children were having a spat in the backseat of the car and she looked at me and asked, "would you mind taking the kids in your car"?  Of course I didn't mind and besides, I knew they'd love to watch a little bit of a movie on the DVD player. They were thrilled with DVD player but it's such a short drive to my home that they only got to watch the previews before the actual movie began. Nevertheless, they were instantly happy.

When we arrived at my home Gigi greeted the family at our gate and then our kids, followed by Kosta. Our kids were so excited to have visitors because they rarely have others to play with at home since we virtually have no neighbors. Well we do, but most of them are chickens and dogs.
So, the children became acquainted quickly and off they went. We didn't see or hear much of them for the entire evening. Our husbands sat together on the balcony and discussed...well...who knows what- for hours. Everyone got along so well, it was wonderful.
Over coffee we  had so much to talk about, it seemed as if we'd known each other for much more than only a year. We laughed a lot and every now and then we would stop our conversation because we'd hear something drop upstairs. We'd stop talking long enough to make sure that the kids were fine and then continue right where we left off. 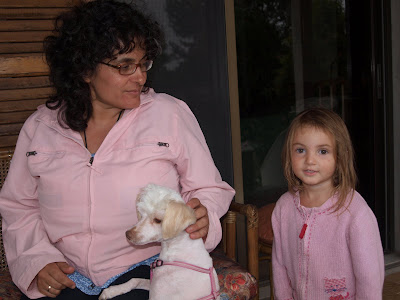 I had a peek in Foti's room from the balcony and found two young warriors... 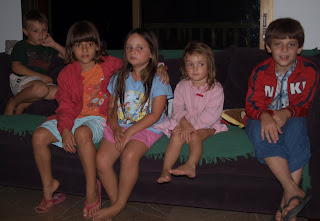 The children exhausted after playing for hours. They watched a movie to wind down. Maria's husband, Dimitri, with Kosta
All of us had such a nice time but then it started to get late and everyone, especially the children seemed to be pretty tired. It was bittersweet to see them leave, we wished that they could have stayed for days! We've already discussed what we'll do the next time we meet here, unless we end up in Crete first, you never know! 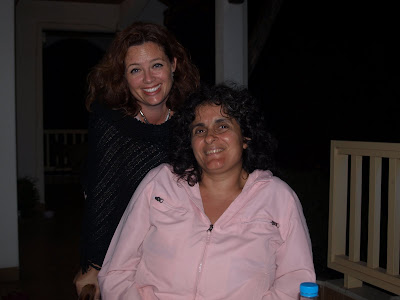 Here's a nice photo of myself with Maria... 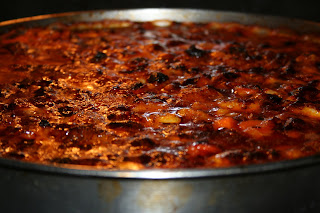 The aroma of gigandes baking is enticing...


I've been making gigandes for years and they were good. All of my friends in the U.S. loved when I made them and my sister used request that I make them. I used to make gigandes based on a recipe from one of my favorite cook books and although they were good, for me, they were never quite right.
Since I love Maria's recipes I decided to try her version of gigandes.  What she adds in hers, that I had never put in mine, is tomato paste. I had never used it in mine and it makes a huge difference in the consistency of the sauce by adding richness and more flavor.  Also, she adds sausages to her beans. So far, I haven't used sausages but I can imagine that the beans with the sausages combined are delicious. But my family loves her recipe! I make these at least once every few weeks. Thank you Maria! 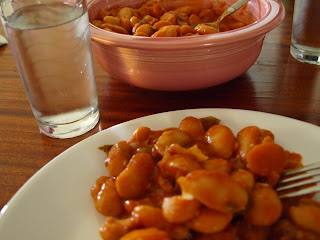 Visit Maria's other marvelous blog :
One Day in Hania