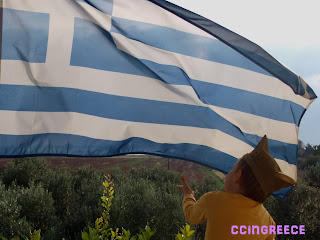 I took this photo of Foti last Friday after he came home from school wearing this soldier hat that he made in class. They've spent the last week preparing to celebrate Oxi Day, which is today.  Shortly after our little photo shoot Foti went to play in the yard, still wearing the hat. It wasn't long before he came stomping in the door shouting, "let Tarzan loose on the street! Let the dog lady get him! I don't want him anymore!"

I asked, "Why? Why would you say those things about your dog?"

He answered, "because he took the hat off of my head and ate it!"

I'm glad that we took the photos right away.

Oxi Day, which is celebrated on the 28th of October in Greece, Cyprus and Greek communities worldwide, observes Greek Prime Minister Ioannis Metaxa's  refusal to accept the ultimatum made by Italian dictator  Benito Mussolini on October 28, 1940.

Emanuele Grazzi, the Italian ambassador in Greece, presented the ultimatum to Metaxa at dawn on October 28, 1940 demanding that Greece allow Axis forces to enter Greek territory and occupy nonspecific "strategic locations" or face war. It's alleged that Metaxa answered with a single word: oxi (no). After his refusal, Italian troops stationed in Albania, along with an Italian protectorate, attacked the Greek border.

For more detailed information about Oxi Day, have a look at these links...

The significance of "Oxi Day" on October 28 in Greece

The Pride of OXI DAY -October 28

The Story of OXI Day

or you can watch this documentary...