My Night with Peter Minakis 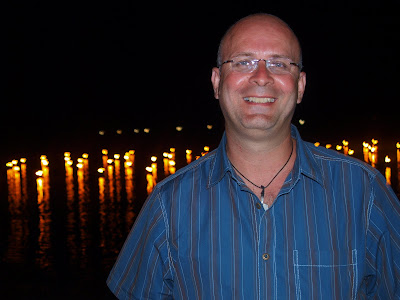 Well, it was more like "our" night with Peter Minakis since my husband was along. I thought I'd make a somewhat scandalous title since earlier in the day that we were supposed to meet Peter, his status on facebook mentioned our plans and included the phrase, "scandalous photos to follow"...very funny. Well, there aren't any scandalous photos but there is evidence that we've met.


A little more than two and a half years ago, when I was sitting at my computer starting my blog I wouldn't have imagined that I would be meeting and keeping in contact with so many amazing people. Sure, I've read the blogs and commented but I had never expected an ongoing conversation about all things Greek and more importantly, food. Although I'm not technically a foodie, I love food and I do actually use the recipes and suggestions that my Greek foodie friends have to offer, since Greek cooking wasn't a part of my life until I married Kosta. Well, actually cooking wasn't a part of my life until I met Kosta, but that's another post in itself.

As I skim the sites of the Greek food bloggers for new recipes to try, I often find myself enthralled in the history, stories and anticdotes offered with the recipes. What I really love is reading a post of a foodie with a sense of humor, since I love to laugh and can't wipe this permenant snicker off of my face. Peter's site has  everything that I look for and more. What's more, is that he's so personable and does try to address everyone that comments or comes in contact with him somehow. I'm not sure how he does it, but, he does.

After following his site for a while I realized that his  family summer home in Greece is very near our home. So, we exchanged tweets and agreed that it would be nice to get together when he was in town. So, after he arrived we set up a date and that was that.

Everything was set that day, we decided that we would stay in his village, Nea Kallikratia, for dinner and all that was left for us to do was to show up. Well, it turns out that we had a pop-in that evening. Typical. We had plans (for once) and as things are running smoothly, someone pops in. It was supposed to be a five minute visit and it turned out to be over an hour. Great, I still had to get dressed. So, I called Peter to tell him that we would be late. Ever patient Peter was understanding since first, he's Greek and second, he's in Greece where almost everyone is late for almost everything.

We met Peter in front of  a church in his village, parked our car and enjoyed a nice walk toward the seafront. 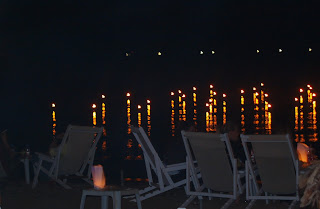 We started the night with drinks at a beach bar. The water was so calm, the ambient music was perfect and the bar wasn't overcrowded, perfect! 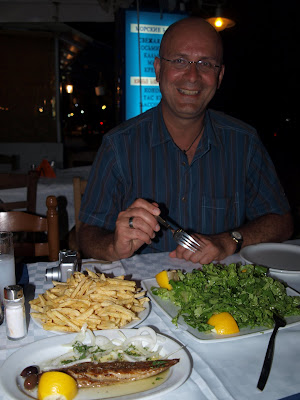 After our drink we headed toward one of Peter's favorite Psarotavernas, one he's been dining at for as long as he's been spending his summers here. Look at how happy he looks! What a perfect "foodie" picture, I  think. 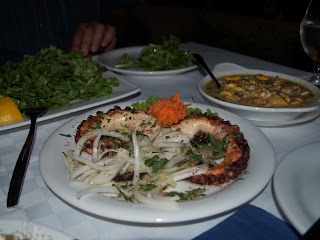 As you can see, there's always octopus on the table when Greek seafood lovers are out. It was delicious! 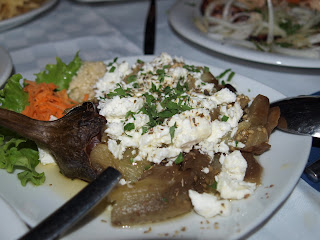 Here's something different...I chose grilled eggplant over eggplant salad and this is what was served. Roasted eggplant with melted feta, lots of garlic and parsley. I have never had this before and it was scrumptious. 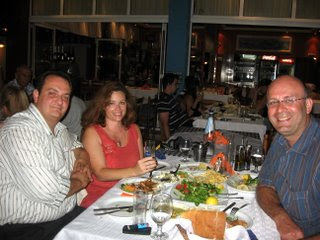 Here we are with Peter. The picture was taken with his camera since I failed to get one. Thank you Peter! 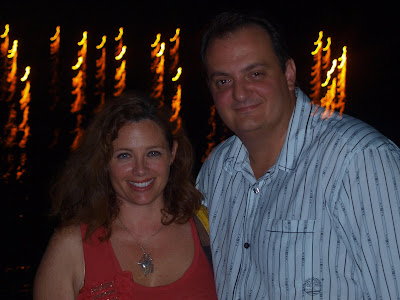 He also took a picture of us, it's rare that we have someone available to take a good picture of us and with such a great background . We had a wonderful dinner, wonderful conversation and now, we have a wonderful new friend. Thank you Peter, we can't wait to see you again next summer! 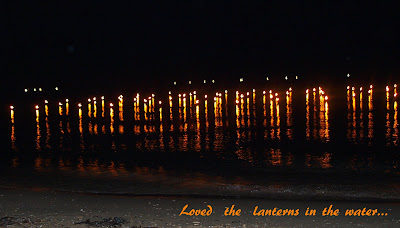 Kalofagas.ca
Greek Food and Beyond
Grilled Sardine Fillets With Chips ( here he shares another great recipe along with his summer routine)
Kalofagas on Twitter
Pay it Back with Food