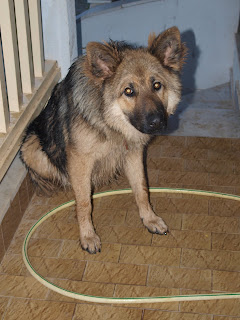 Lobo on one of his first nights in the compound. He was still a little nervous.
I'd like to introduce you to our newest resident, "Lobo".  Lobo is a stray that was hanging around outside of our gate for nearly a week. He grew so comfortable with us that whenever we opened the gate to leave, he would run in and we couldn't get him out.
I fed him and I rubbed his head and now he's definitely not planning on going anywhere anytime soon. He's wearing a collar so I assume he's lost. I've been to the vet to report that we have him. Lobo is welcome to stay until we find his owners (hopefully). 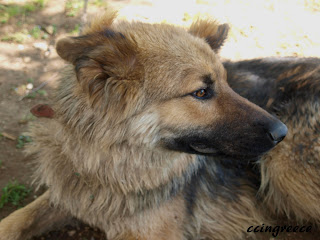 We decided to name him yesterday because we were calling him "the dog" for more than a week.
The kids think that he looks like a wolf to them so they decided to call him "Lobo" which means "wolf" in Spanish. 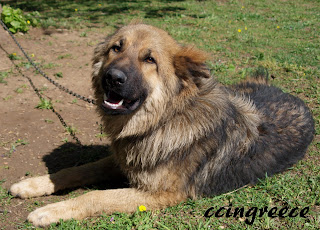 I believe that he's a Belgian Shepard, he's gorgeous and still quite young. He has a bad habit of jumping on me when he sees me but since I've been working with him, he's not jumping as much. (although it's still irritating...
he's a big dog!) 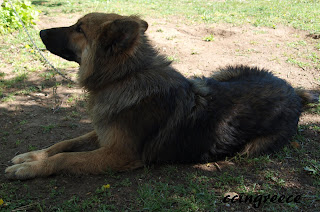 He's adorable, gentle and already very good to the children. As you can see, he's relaxed a lot since we've taken him in. Although I don't mind keeping him, I hope to find his rightful owners as he's probably missed.  If any of my readers know of anyone missing a dog please leave a comment or show them this post. He could be from the areas of Mixaniona, Epanomi or Mesimeri. In the meantime, he's getting a lot of love & hugs from us.
Posted by Cheryl at 11:43 AM