L is for Lizard 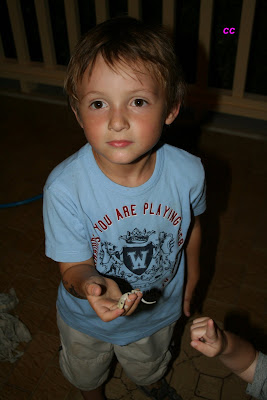 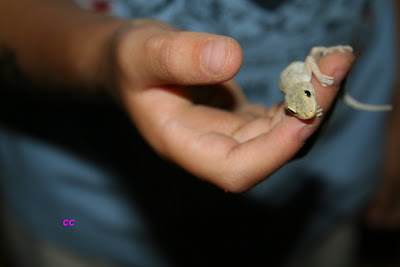 Well we've had quite and exciting week with the creatures around here. The kids have a new routine that includes catching as many lizards as they can before coming in for the night. Last night we had 3 lizards in a jar. Today we have 2. The kids always let them out in the morning so that our lizards can thrive. It's funny because sometimes when the kids grab them, their tails break off. Now they can differentiate between a new lizard at the house and one that they've had before because so many are missing their tails. Foti is such boy when it comes to these things. He loves to watch the broken tail flip around in the palm of his hand while giggling, that is, if a tail breaks off. I think it's gross but, hey, I'm not a boy -so what do I know.
Speaking of lizards, I finally saw the big green one that everyone has been screaming about. Ok, so it's not as big as an iguana, but it's half the size of one. It's very green and lives somewhere on the property. I'm glad that I was able to see it so I can acquaint myself with it, perhaps when I'm weeding the garden since it seems to hang out there. I promise to snap a picture when it comes out of hiding.
Tonight we also have a gross spider making a web inside of a water bottle...taking up residence is Foti's room. It's definitely got to go in the morning. I don't want that thing getting out.
And finally, the owl visited us again. He decided to visit us late in the afternoon. The kids were thrilled. Gigi didn't stop barking for about 15 minutes after that incident. As I was talking with a friend last night she mentioned that my house sounds like a zoo. I agreed.
Posted by Cheryl at 1:21 AM