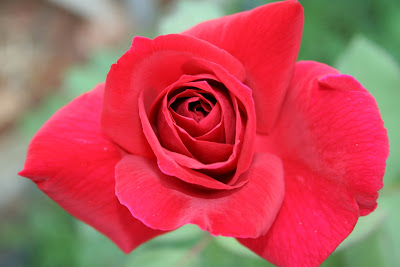 The kids really enjoy their new school. So far, I'm not sure what I think. The kids have been fighting on the bus so I asked the bus driver and the teacher on the bus to separate them. I don't care if they're siblings...it's best not to stick them together on the bus right now. It's been a week since their "separation" and things have gone well. There's an open house this week and I'm looking forward to meeting some other parents. Last year their school was so far away that it was difficult for our kids to get together with other children to play. What I really need is to find playmates for Foti. Since moving here, there's been a shortage of boys his age in our reach so I really hope that he can find some friends at this new school.
Iza has provided the class with a toad and now they're studying frogs and toads. That's pretty cool. Yesterday we caught a baby Balkan Green Lizard (thanks for pointing us in the right direction Syd), and soon it will be off to visit the classroom. I took some pictures last night but they didn't turn out because the flash reflected off of the glass jar that it's in and made things a little blurry. Finally, we are expecting a tortoise to arrive any day now. Iza is extremely excited about that. I think that it will be cool to have a tortoise hanging around here.

Gigi is recovering from an injury. Thursday morning I noticed that she was hopping around and she just wasn't herself.. I took her to the vet and it turns out that the tendons in her front left paw are stressed. It could have been caused by anything but who knows what for sure. So, the vet gave her an injection to ease her pain a little and I've been giving her an anti-inflammatory. The kicker here is the other part of her treatment. I'm supposed to keep her inside either on a leash or locked in a bathroom where she can't jump up on anything ...for a week! Ok, I want to do what's best for Gigi but after putting her on a leash for half a day she stressed herself out by crying and trying to get off the leash. She was so stressed that she made herself sick all over the rug. I put her in the bathroom and I thought that she was going to knock the door down. So, we're letting her recover in our company. She does hang out on the couch more than anything and we're trying to keep the kids from playing with her as much as usual. She seems to be better but only time will tell. She's wormed her way onto my bed these days. I always said that I love her but there's no way that she'll sleep on my bed, well, I'm all talk. How can I refuse her warm little body at my feet?

Friday we put together a new bed for Foti and he won't come out of his room. He loves it. We painted his room last weekend. What colors? Spiderman red and blue. Yes, we took a Spiderman doll to the store and chose the colors that way. Here are some photos from their adventures in painting last weekend.... 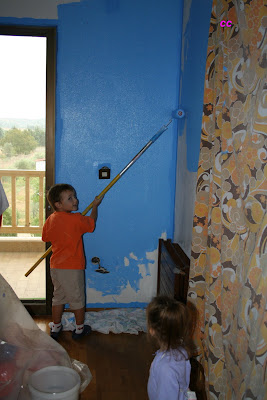 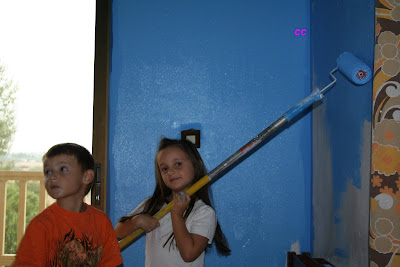 That's all for today. I hope that everyone is having a great weekend!
Posted by Cheryl at 8:59 AM