So maybe a little more than fifteen minutes...

Here are the videos that you've all been waiting for. They've been recorded by Belpana, a blog reader that came out of lurking to help me out. What she has done is beyond generous...thank you again Belpana! What a fantastic surprise!
Here are some pictures that I took at the the TV station. 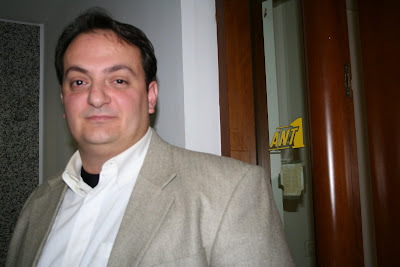 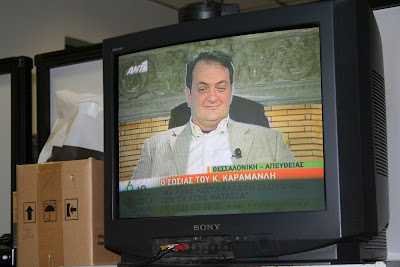 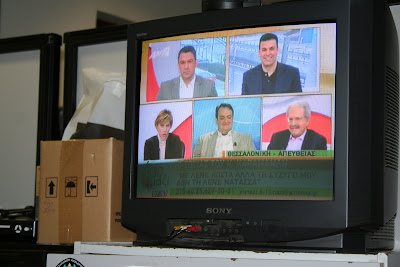 I was sitting outside of the studio watching and giggling with myself as there was nobody else around for a while.
As we were leaving the station one of the ANT1 employees stopped us and handed Kosta a phone. It was someone from the Kalimera Ellada show and they wanted to have Kosta on the show Monday morning. Of course, he accepted the invitation.
While we were stopping for coffee, my phone rang. It was someone from another channel. They wanted Kosta to appear on their morning show also. Unfortunately, he couldn't have been in two places at once so he had to decline the invitation.
This was a lot of fun for us and the kids were absolutely thrilled to see their father on TV. Izabella told her classmates and they didn't believe her. Foti was just beside himself. Belpana recorded a segment of his appearance on Kalimera Ellada.( a million thanks again Belpana!!!) Here it is...enjoy!
Posted by Cheryl at 6:56 AM