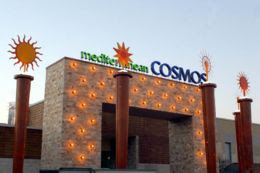 Early Saturday morning we had coffee with Thia Nitza (Kosta's aunt that lives on the corner, up the dirt road from us...it's because of them we found our home). She served us coffee with a homemade yellow cake and the chocolate chip cookies that I made for her. We had a nice conversation and the kids played outside. We finished our coffee and set off for Mediterranean Cosmos, a mall that's not too far from us.

It was insanely busy. It usually is on the weekends. Luckily, we found a parking spot relatively quick for the situation at hand. There were cars parked on the sidewalks, on the grass and down the narrow roads surrounding the mall. We walked the mall for a bit and then decided to get something to eat. As you might have guessed, the food court was packed. It was like a giant smoke chamber too, as people are allowed to smoke anywhere here. Ok, it's technically prohibited in some places in the country, but it doesn't matter, people are still lighting up wherever they want since almost nothing is ever enforced here. Hence, parking on grass and sidewalks. (there really is not enough space) So I said to Kosta, "It's too smokey to stay inside let's find a table outside". And just as I said that a younger woman said to her friends, out loud, in Greek "Ti lea, Ti lea?" . ("what did she say?") It's irritating because I understand Greek but yet because I am obviously a xeni (foreigner), so typically it's assumed that I just don't understand or speak the language. I turned to the woman and replied, in Greek, "Exi poli kapno atho..." ("There's too much smoke in here")....with a smile of course. She got quiet really quick. I love doing that to people here. It's like you're saying "Boo!" or something. "Gotcha!" Hee, hee.

There's a nice carousel and also a train at the center of the mall so we let the kids have a ride. They were so happy. Iza kept saying that we were the best parents ever. That was really sweet. Foti waved each time that his train car went passed me and Alexandra just laughed in the stroller as she watched.That's what it's all about folks, just the joy that flows out of these little people is enough to keep me going.

After a long day at the mall the kids had major melt-downs and fell asleep only minutes after we got into the car. We had really planned to go to IKEA on our way home but with the kids sleeping there was no way we were willing to wake them up so I offered to sit in the car with them while Kosta went in to pick up the things that we had on our list. I was in the car for an hour! I just love sitting in the car. Anyway, as I sat there I had no choice but to watch everyone else coming and going. What disturbs me is the number of people willing to put their small children in a car without a seat belt. Don't people know how dangerous it is to have children in a car without a seat belt? I witnessed 7 people get into a BMW, 7. There were 4 adults and 3 young children...2 adults in the front seats and 2 adults in the back-with the 3 children. It was almost like one of those clown cars that you'd see in a circus, only it's not funny. What would happen if there was an accident? Next, a woman came out of the store with her husband, toddler daughter and infant in her arms. Her husband helped the toddler into the backseat along with his wife and the infant. The infant remained in her arms as they drove away. It's nuts. But that's just the norm here. I do, however, want to point out that I did witness many more families properly buckling up their children and themselves, so it's clear that not everyone lives their lives on the edge.

So, we had a nice time getting out and away from the house on Saturday. On our way home I realized that we might have been gone a little longer than poor Gigi might have been able to "hold it". I'm so used to cats. I'm not used to rushing home to let the dog out yet. She was fine and didn't have any messes for me to clean up, what a relief.
Posted by Cheryl at 4:40 PM