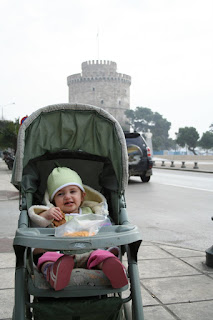 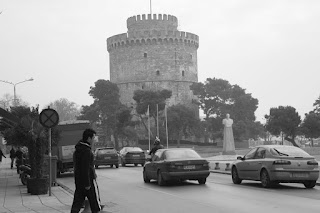 Friday morning I went to the city to have coffee with a friend. She's American also and it was refreshing to have a conversation with someone that actually gets me. (Thanks for the coffee A! ) Kosta dropped me & Alexandra off because he had some errands to run. He was late picking us up so I walked around the block with Alexandra about 4 times, back and forth and then I finally went back into Starbucks with Alexandra to warm up. It wasn't very cold- just damp. While I was walking I saw a man pick up a piece of candy from the sidewalk. He looked at it and then stuck it in his mouth. That was just nasty. I know that it wasn't his because I passed the piece of candy a few times while walking. Eeeew! The one thing that I miss about living in the city is that there is always someone doing something peculiar. One of the funniest things that I saw last year occurred about 1 block from where I lived. There's an odd "heavy set" man that lives in a house on a corner, across from 6+ apartment buildings. One day I was walking by on my way to meet my friend Julie for breakfast and I couldn't believe my eyes. There was the guy sitting on his front walk in nothing but a Speedo, surrounded by cardboard covered in aluminum foil in the middle of winter. He smiled and said "hi" -so I just nodded with a grin, acknowledging his greeting. I was cracking up inside. I think that he was trying to be the next Dick Bacon. (You're so NOT Bacon dude!) It must have been about 35 F that day. When we were finished with breakfast I made sure that Julie drove past to see if he was still out there. He was and we laughed so hard! He still does it, I think. My husband and I dubbed this man's house as "middle earth" because of the things that go on there.

Anyway, back to what I was saying...When Kosta finally arrived we decided that we would pick the kids up from school since we were in town and school was just about to end. They were so happy that we surprised them since the bus ride home takes about an hour. On our way home we stopped at a garden shop. It's been really mild for the last few days and I'm getting garden fever. We bought a lot of bulbs- tulip bulbs, freesia bulbs, crocus and more. It seems strange that I'll be planting bulbs soon opposed to how they would have already been planted in October in Wisconsin. Izabella planted some in a pot yesterday but we didn't actually have time to do more than that because we were moving Kosta's office into the basement. It's all moved so now all that he has left to do is organize his things. The basement is beautiful now. It's one of the first things that we had done after we moved in. I realize that I haven't really posted much about what went on in the first weeks/months that we moved in as we didn't have access to the Internet and also that we were so insanely overwhelmed with the entire process. This definitely wasn't a home that we could just move in to, we had to empty it first. I'm still healing from the ordeal. I promise, I'll get around to the details soon.

So all is well with us. It's different for us to live out it the sticks but we're adapting well. It's great that we're a short drive away from the city because we can enjoy it when we want, but not have to deal with it on a daily basis. I don't really think that I could handle Thessaloniki, it's so much more intense than Milwaukee. The East side of Milwaukee is tame, it's not even comparable. I think that Thessaloniki tops Chicago on the insanity meter.

*photo of Dick Bacon from Milwaukee Journal/Sentinel*
Posted by Cheryl at 10:00 PM