Last week we celebrated Kosta's name day. Because it landed on a Wednesday this year and we are actually in Greece, I wasn't sure how many people would stop by. I did know that MIL was coming over for sure and that I had to make a nice meal anyway. As it seems like I've been entertaining constantly for the last month I've gotten a little tired of my own recipes and wanted to try something different. Also, I didn't want to make anything too complex as my time was limited.
A few weeks ago my neighbor treated me to some potato salad that she'd made and I loved it. The ingredients were easily identified and it had an unbelievably fresh taste. So, I decided to make a potato salad and I wanted to come as close to her recipe as I could. I've been making a great potato salad for years and it calls for mayonnaise. Although it's delicious, sometimes it can be a little heavy. And, since it's been really warm here for the last week I thought that it'd be best to stick with lighter dishes.

I looked at several recipes on different blogs/sites that I frequent and I chose to make a recipe from About.com: Greek Food's -Nancy Gaifyllia. Her potato salad/patatosalata recipe calls for everything that I already have in my kitchen so it didn't require any additional shopping. I made it early in the day so that it would be ready for a meal later in the afternoon and I refrigerated it. I have to say, it was absolutely delicious. Because it was also a warm day, I'm glad that I chose to chill it because it was so refreshing. And, the best part of the whole patatosalata experience was eating it the next day. I think that salads like this are always better the next day. Anyway, we all loved this salad so much that I decided to make it again Saturday, as we were having yet another BBQ.

Now, our guests Saturday weren't just anybody...they happened to be a family that owns one of the best salad companies in Greece. Can you say intimidating? Yeah, I have to cook for the salad king. I stuck with simple, traditional recipes. My tzatziki turned out runny (of all days!-I don't think that I've ever made runny tzatziki!) and I was embarrassed. He said that it was probably because the cucumber wasn't fresh and that all of the water from it goes directly into the yogurt. (sigh---lessons from a master at the table...I appreciated it but I still wanted to hide). But, his input is helpful and I'll keep it in mind. You must be able to snap a cucumber in half, that's how you know that it's fresh. Ay!

He ate the meat and most of the salads. I noticed that he ate quite a bit of the patatosalata which put me at ease after the tzatziki lesson. Also, he couldn't get enough of our olive oil-knowing that it was ours he just kept soaking it up with his bread.

So, the salad was a hit. It's perfect for summer BBQs and picnics, although I'd make this salad any time of year.

Here's a picture from Wednesday: 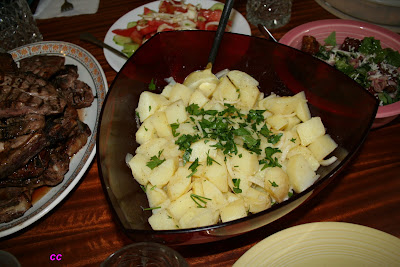 Now here's a picture from yesterday afternoon. Alexandra was trying to serve herself some more of the leftover patatosalata: 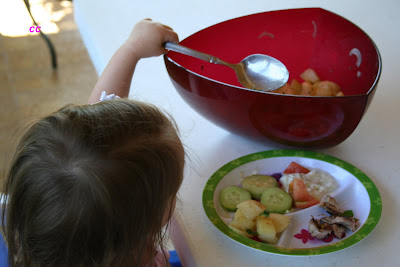 Before I go I want to say that I hope everyone back home has a nice Memorial Day.I think that I have some Sweet Baby Ray's in my American food stash-I'm going to use it on chicken and grill it the way that my father taught us. I'm also going to open a can of corn and have some baked beans! The leftover potato salad will fit in well with my holiday menu. Again, enjoy your Memorial Day.
Posted by Cheryl at 9:36 AM