1st Octopus of the Season

I think that a lot of my readers were thrilled with my first octopus post from last summer so I owe it to all of you to share the news of our first octopus of the season. This octopus was speared by Kosta on June 15-Father's Day. What a great present for him! He was only in the water for about 10 minutes when he emerged with his catch. I find that amazing. I've snorkeled a lot and I've still never seen an octopus hiding under a rock or swimming. I've been trying to spot one for 18 years. Maybe one day I'll see one but I'll leave the spearing to Kosta and in the future, Foti. 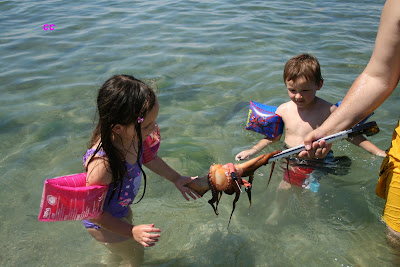 It was interesting to see how the kids reacted to the octopus this year. Izabella seemed a little apprehensive to handle it this time and Foti wanted to take it from Kosta as soon as it came out of the water. He's definitely a future octopus hunter. 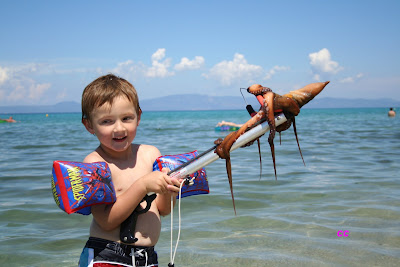 He even volunteered to slam the octopus on the rock in order to tenderize it. I'm glad because I didn't really feel like doing it since my designer sunglasses were stolen and it wouldn't look quite right unless I was wearing them. Look at how seriously Foti was doing his work! 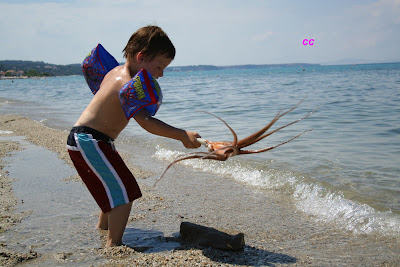 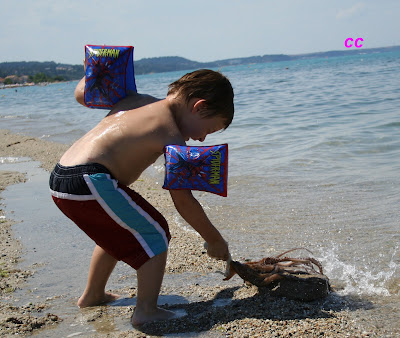 The kids also listened intently while Kosta explained where the tooth of the octopus was, how the suctions worked and why the octopus squirts ink. 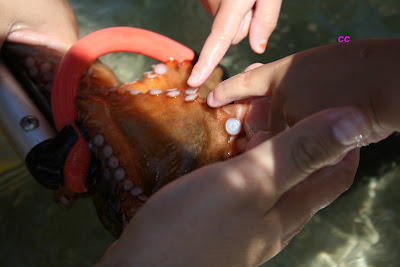 This one was a fighter and was trying its best to get away. Although it's delicious I have to admit that sometimes, just sometimes I'm not thrilled watching the process. I forget quickly though because I love to eat them and I think that my husband is a master at handling them. 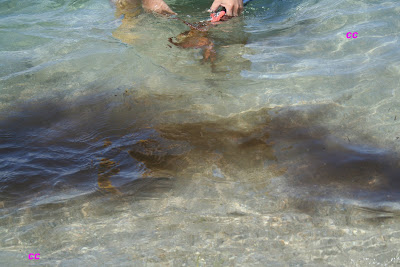 I think that we all posed with it this time. Here's one of Izabella's poses. She slammed the octopus on the rock a few times but it was too hard for her, she said that it was too heavy. 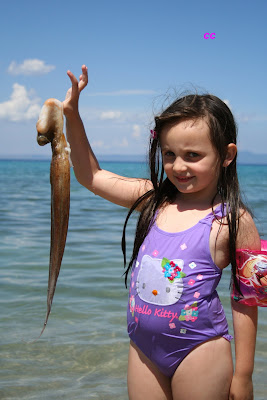 After we were finished tenderizing the octopus a little boy that had been watching us came over to show us the starfish that he found. I thought that it was sweet but my kids weren't impressed after having handled an octopus. I still think that it was sweet and I told them to be kind to him. I assume that he was vacationing with his parents since he didn't speak Greek or English. 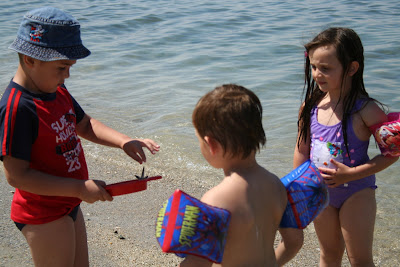 When we finished at the beach we were ready to make dinner. We brought fish with us that we had planned on grilling and we added the octopus to our menu. It took longer on the grill but it was worth the wait...and I can't wait for the next one. There's nothing like fresh seafood in the summer!

***I'd like to thank our new friend Phivos Nicolaidis for featuring a picture of Foti on his travel site. His site is extremely informative, beautifully descriptive and he has great music also! Check it out! Thank you Phivos!***